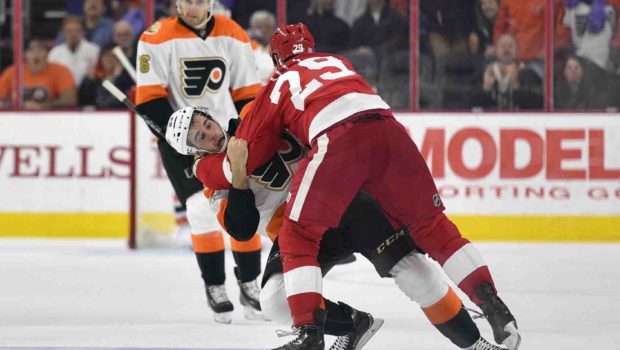 FLYERS GO TO OT FOR 4-3 VICTORY OVER PATSY RED WINGS!

Jake Voracek scored in overtime after Mark Streit tied it with 1:02 left in regulation in the Flyers’ 4-3 comeback victory over the Detroit Red Wings last night at the Wells last night.

Chris VandeVelde and Roman Lyubimov also scored to help the Flyers run their regular-season home winning streak against the Red Wings to 12 games.

The Red Wings last beat the Flyers in Philadelphia in the regular season on Jan. 25, 1997. Detroit did win the first two games of the 1997 Stanley Cup finals in Philly on its way to sweeping the Flyers.

Voracek completed the comeback by finishing a 2-on-1 with Claude Giroux 1:41 into the 3-on-3 overtime. The assist extended Giroux’s points streak to a career-high 10 games while upping his NHL-leading assist total to 11.

“You have to expect the pass and I kind of knew it was coming because he’s one of the best playmakers in the game,” Voracek said. “I just tried to shoot hard.”

Streit tied it at 3 on a rebound after a scrum in front of the net. Goalie Petr Mrazek was taken out on the play when Frans Nielsen pushed Brayden Schenn into him. Detroit challenged the goal, claiming goalie interference, but it stood after a video review.

“I disagreed with the ruling but I don’t make that decision, they do,” Red Wings coach Jeff Blashill said.

Zetterberg broke a 2-2 tie with 11:42 remaining in the third when he finished off a 2-on-1 with Tomas Tatar. Tatar created the break when he stripped Radko Gudas of the puck at midice, passing quickly to Justin Abdelkader before a return pass set up the fast break.

Zetterberg broke a tie with Brendan Shanahan for eighth place in Red Wings history with his 310 goals.

But the Red Wings couldn’t hold on.

“It wasn’t as complete of a game as you need to win on the road obviously,” Blashill said.

The Flyers tied had tied it 4 1/2 minutes earlier on Lyubimov’s first NHL goal.Andrew MacDonald set up the tally with a shot from the point. After Mrazek made a pad save, a wide-open Lyubimov shot the rebound high over the Detroit goalie. Lyubimov, a 24-year-old rookie, played the last six seasons in Russia.

“I think that’s a trait within the locker room,” Flyers coach Dave Hakstol said. “That’s not a surprise to anybody in our room. We’ve been able to do it a couple times and come out of a game with points, but that’s not a position you want to be in.”

VandeVelde celebrated becoming a father for the second time with his 13th goal in 208 career games. The checking line center, who welcomed daughter Larkin into the world on Tuesday morning, finished a beautiful pass from Schenn to pull Philadelphia within 2-1 with 6:21 remaining in the second period. Schenn fired a cross-ice pass to VandeVelde in the slot, and VandeVelde deked past Mrazek by quickly shifting from his forehand to backhand.

“I’m glad I can come out here and contribute and score a goal for her,” VandeVelde said.

The goal capped a dominating second period for Philly, which outshot Detroit 17-6 over the 20 minutes.