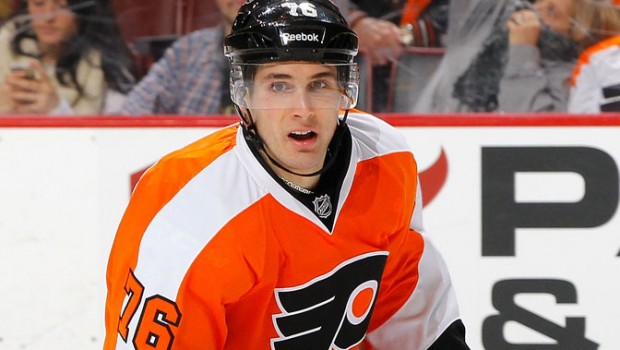 The Flyers have the great, good luck to be playing the Toronto Maple Leafs tonight at the Wells, looking for their first four-game winning streak as Toronto has lost eight straight.

The losing streak is Toronto’s longest since last season’s fallout from March 16-29, but the Maple Leafs haven’t dropped nine straight since 1985-86. They’ve also dropped eight straight on the road, and another would be their longest such single-season skid since also losing nine in the 1996-97 season.

“We’re finding ways not to win,” said interim coach Peter Horachek, whose team is 1-10-1 in January. “We’ve got to find ways to win now.”

It very clearly begins with scoring. Toronto (22-24-4) has been limited to seven goals on the road skid as well as on its overall 0-7-1 stretch, going 2 for 26 (7.7 percent) on the power play. Six of the eight losses have come by more than a goal.

The Maple Leafs blew a third-period lead for the second straight game Thursday in particularly ugly fashion, falling 3-1 to Arizona. Jonathan Bernier allowed the fastest short-handed goal in NHL history to begin a period on a flip from nearly the opposite blue line, drawing the ire of the home crowd five seconds into the third.

“It’s tough to stay in, especially when I thought I was playing pretty good and the fans get on you,” Bernier said. “It gets frustrating, but I’ve got to be stronger mentally and stay in it.”

He didn’t have much help, facing 45 shots and losing his sixth straight start. He also allowed every goal in a 7-4 loss Dec. 20 to the Flyers, seeing his goals-against average rise to 4.78 against them – his highest versus any team – with a 2-3-0 career record.

Philly (21-22-7) has won three straight for the fourth time this season, with all three coming to begin a five-game homestand.

Chris VandeVelde (photo above) scored for the fourth time in five games in Thursday’s 5-2 victory over Winnipeg. Wayne Simmonds had a goal and an assist to give him goals in consecutive contests after an eight-game drought.

Steve Mason continued to shine with 36 saves, going 4-0-0 with a 1.43 goals-against average in his last five appearances. He didn’t face the Maple Leafs in the first meeting, but his 3.64 GAA in seven starts against them is his worst versus any opponent.

The win over the Jets was his second game back and first start after sitting out six games due to a right knee injury.

“The injury hasn’t been a problem, which is great,” Mason said. “I thought my game felt sharper than (Tuesday’s 4-3 win over Arizona), which is obviously a positive sign as well.”