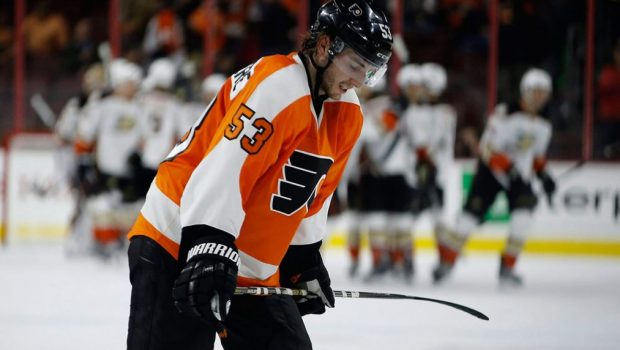 FLYERS GM TRIES TO DEFEND GIVING AWAY THE GHOST FOR NOTHING!

The Flyers finally ditched defenseman Shayne Gostisbehere yesterday, sending him to the Arizona Coyotes along with two picks in next year’s draft to rid themselves of his salary over the next two seasons.

Moving on from Gostisbehere gives the Flyers about $4.5 million in salary cap relief, setting them up to continue a roster overhaul.

“He is a very good offensive defenseman and an excellent skater. He will be a solid addition to our blue line this season and will be a key power-play player for us,” Coyotes general manager Bill Armstrong said.

Arizona gets second- and seventh-round draft picks in 2022 in addition to Gostisbehere and his contract.

The 28-year-old Gostisbehere had nine goals and 20 points in 41 games with the Flyers in 2020-21. He also scored five power-play goals and had nine power-play points.

Gostisbehere was named as a finalist and finished second in 2016 in the voting for the Calder Memorial Trophy, which is awarded to the top rookie in the NHL.

But his play tailed off dramatically after his rookie season and the defenseman simply called “Ghost” in Philly could never regain the spark.

The Flyers missed the playoffs last season and general manager Chuck Fletcher has been busy. Philly traded for Predators defenseman Ryan Ellis last week and the cap space acquired in the Gostisbehere deal is a sign more moves could be on the horizon.

“This was a difficult decision but one we thought was necessary given the reality of the salary cap,” Fletcher said. “Shayne has been a quality player for this organization since the moment he arrived in Philadelphia and has been a part of many special moments in his seven seasons as a Flyer.”