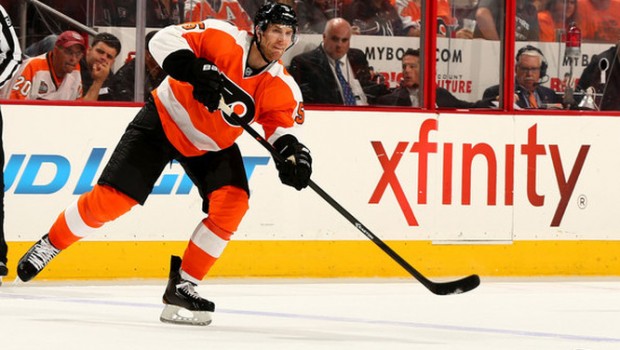 FLYERS' GM SPINS COBURN'S INJURY — OUT ONLY A FEW DAYS

If you believe Flyers’ general manager, defenseman Braydon Coburn could only miss a few days instead of four-to-six weeks with a lower-body injury that kept him out of the Flyers’ game Thursday against the New Jersey Devils.

But why would you believe Hextall.

The Flyers are traditionally the most secretive team in Philly, especially when it comes to owning up to injuries.

For instance, when Coburn got hurt in the season opener against the Bruins, the first word from the team was that he had suffered “a lower body” injury.

Which turned into a foot issue.

When exactly the the foot turn into the lower body?

Coburn was seen on crutches during introductions Thursday night before the Flyers’ home opener against the Devils. Coburn had three shots on goal, two blocked shots and two hits in 20:02 of ice time in the Flyers’ season-opening 2-1 loss to the Boston Bruins on Wednesday.

Hextall said Friday that Coburn would be re-evaluated Monday but was optimistic Coburn would not be out long-term.

“We’ve actually gotten better news than we had [Thursday], but until Monday we won’t be able to be definitive,” Hextall said according to CSNPhilly.com. “I’m hoping it’s short-term instead of mid-term is the best way to put it. Before I was thinking weeks … hopefully now it’s less than that.”

Hextall said he would be patient before deciding on how to handle his roster, whether that included calling up a player from the American Hockey League or pursuing trade options. Nick Schultz, who played in place of Coburn on Thursday, had one shot on goal and one hit in 14:46 of ice time.

“You still got to look at your options and prepare for [Saturday] and a couple of weeks from now,” Hextall said. “We’ll continue to look and see what the options are.”