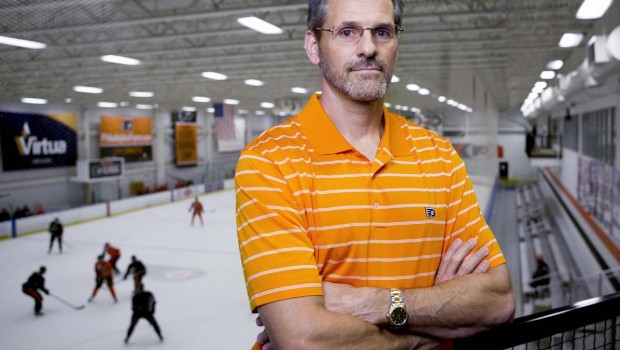 FLYERS’ GM HEXTALL: ‘WE’RE NOT DONE BY ANY STRETCH OF THE IMAGINATION’

So with this afternoon’s game against the defending Stanley Cup champion L. A,. Kings on tap, Flyers fans would expect there would be changes in the offing.

No thank you, according to general manager Ron Hextall, who says he won’t be trading for upgrades to save this terrible season and he won’t be holding a fire sale to get a higher draft pick next season.

One more important thing: Hextall says that head coach Craig Berube’s job is safe despite the Flyers going 1-8-2 in their last 11 games to fall to 8-13-4 for the season.

Hextall said all that Friday while giving a state of the team to reporters after the Flyers practiced at the Los Angeles’ Kings practice rink.

“Well, I can say this, there’s culpability from all of us — from myself, (Berube), the assistant coaches, the players, everybody. Everybody’s in this and we all have to do a better job. So, um … and I have no plans of replacing the coach.”

Hextall also says that his long-term plans of staying patient and building a winner through the farm system won’t change. So there will be no attempts for a quick fix, not that Hextall could do much even if he wanted given the Flyers have virtually no cap space.

“I’m not getting off the plan that I set out in the summer time,” Hextall said. “We’re heading in the same direction. We’re off track right now a little bit for this season, but I am not going to do something that’s gonna hurt our future to try to get a few points or make the playoffs now.

“I believe we still have a good enough team to make the playoffs, but I’m not sacrificing anybody or our future to try to make this team better right now. If the right deal comes along, then I will look at it.”

One option would be to dump salary to give the Flyers a better shot at winning the 2015 NHL draft lottery so that they could get one of the two big prizes, Connor McDavid and Jack Eichel.

On Friday, Hextall shot down that notion.

“We’re not getting rid of guys to try to finish first or second (worst) in the league,” he said. “You guys won’t be asking that question in a couple of weeks, I believe.”

Hextall’s hope is that the Flyers get hot starting Saturday afternoon when they play the reigning Stanley Cup champs. “Well, I’m very unhappy about (the 1-8-2 slump),” he said. “I think everybody is — the coaching staff, players, myself. I think what you’ve got to do … It’s not time to look back being 1-9 and feeling sorry for ourselves because that’s not going to make things any better for us.

“We played a very good game in San Jose. I was really happy with our effort and our execution. In my mind we should have won the game. Then we came back in back-to-back games, we had to travel, and we played pretty well in Anaheim. I’m not saying we necessarily deserved to win, but that was a top team, and again I liked our effort. So hopefully we’re treading in the right direction. We need to go on a run. We need to get a run going here.”

Despite their long slump, the Flyers will go into Saturday’s game just six points behind the Rangers for a playoff spot.

“We’re not done by any stretch of the imagination,” he said. “We gotta put a streak together.”