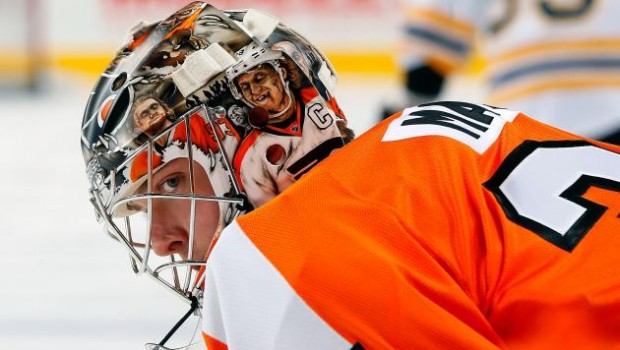 FLYER GM HEXTALL: ‘I DON’T LOOK AT US LIKE WE’RE NOT A GOOD TEAM’

Steve Mason, who stopped 34 shots in Saturday’s 4-2 win over the New York Rangers in his first start since suffering a lower-body injury Feb. 8, will need to be just as sharp tonight against Calgary.

A troubling meme has developed around the Flyers:

And with only 19 games remaining in the regular season and the Flyers still six points behind the Boston Bruins for the last playoff spot in the Eastern conference, they need to clean up tonight against the Calgary Flames at the Wells.

Calgary is perhaps the league’s biggest surprise this season, but their playoff hopes suffered a heavy blow with the injury to Mark Giordano.

The Flyers won’t feel any sympathy as they try to continue their own postseason push.

Giordano had 11 goals and a team-leading 37 assists before suffering a torn biceps on Wednesday that will leave Calgary without the Norris Trophy front-runner for the rest of the season.

After falling 2-1 to the New York Islanders in their first game without their captain Friday, the Flames (33-25-4) did little to fill the void at the blue line before Monday’s trade deadline.

Calgary also lost an offensive presence by trading Curtis Glencross to Washington on Sunday in exchange for draft picks. He had nine goals and 19 assists in 53 games.

Philly (27-25-11) traded away defensemen Kimmo Timonen and Braydon Coburn prior to Monday’s deadline, bringing back a second-round draft choice from Chicago and 24-year-old defenseman Radko Gudas from Tampa Bay.

While those moves were aimed toward the future, general manager Ron Hextall believes his team is still in position to compete this season.

“I don’t look at us right now like we’re not a good team,” said Hextall. “We’re a good enough team to make the playoffs and Cinderella runs happen every year … No one on our side, including the players and coaches, doesn’t think we can’t make the playoffs. But as an organization we’re trying to stay competitive, trying to stay good and grab assets for the future.”

Steve Mason stopped 34 shots in Saturday’s 4-2 win over the New York Rangers in his first start since suffering a lower-body injury Feb. 8. Mason owns a career-best 2.25 goals-against average, and his .926 save percentage ranks sixth in the NHL.

“(Saturday’s game) was an absolute must-win,” Mason said. “Everybody in the dressing room knew the situation going in, and I think the guys responded well. We just have to continue pushing forward.”

Philly won both meetings last season on the strength of Brayden Schenn’s two goals and two assists, and now catches the Flames at the midpoint of a seven-game road trip.