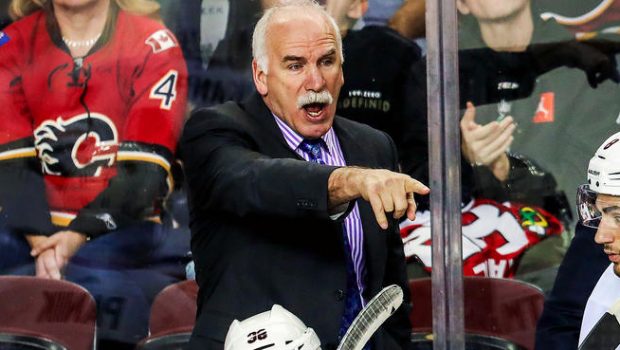 FLYERS GM DENIES HE’S EVEN SPOKEN WITH QUENNEVILLE ABOUT COACHING!

Flyers GM denied reports published over the weekend that he had hired a new coach to replace Dake Hakstol, whom he fired yesterday.

In fact, Fletcher said yesterday that he hasn’t even asked for the the Chicago Blackhawks permission to speak to Joel Quenneville about the Flyers job.

Despite Chicago firing Quenneville on Nov. 6 after a 6-3-3 start to his 11th season with the team, the Flyers have to ask permission to talk with him as he is still under contract with the Blackhawks.

Fletcher also said he hasn’t talked to Quenneville in two years aside from sending the former Chicago coach a message after he was fired. Quenneville is the second-winningest head coach in NHL history, compiling 890 wins with St. Louis, Colorado and Chicago; only Scotty Bowman (1,244) has more. Quenneville won three Stanley Cup championships in 2010, 2013 and 2015 with Chicago.

The Flyers promoted their AHL coach Scott Gordon as his replacement in the interim basis.

“It is my expectation that Scott will be the head coach for the remainder of the year,” Fletcher said.

Fletcher’s use of the word “year” means he is saying Gordon will be the coach for the rest of 2018. Fletcher did not expound on if he meant for the duration of the 2018-19 season. Philadelphia (12-15-4) currently sits in last place in the Eastern Conference with 28 points.

Fletcher’s remarks come after multiple reports this weekend linked Quenneville to the Flyers coaching position before Hakstol was officially fired. The 50-year-old Hakstol took the Flyers to two playoff appearances since 2016.

Philly lost in the first round both times in 2016 and 2018. The Flyers hired Hakstol in May 2015 after he complied 289 wins with seven Frozen Four appearances in 11 seasons at North Dakota.