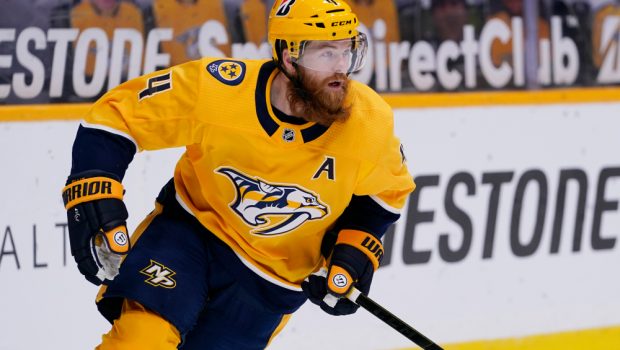 FLYERS GIVE UP ON PATRICK AND MEYERS FOR PREDS RYAN ELLIS!

Just before the NHL entered a transaction freeze that lasts through Wednesday’s Expansion Draft, the Flyers, Nashville Predators and Vegas Golden Knights completed a blockbuster deal.

Nashville sent career Predator Ryan Ellis to Philly for fellow defenseman Philippe Myers and center Nolan Patrick, the No. 2 overall pick in 2017. The Predators then flipped Patrick to Vegas for another young center, Cody Glass, the No. 6 overall pick in 2017. Per Sportsnet’s Elliotte Friedman, this is a purely player-for-player trade with no picks or prospects changing hands.

At first glance, the biggest winner in this trade has to be the Flyers.

While Nashville was exploring trading one of five defensemen that they would have liked to protect from expansion, Ellis was not considered to be a likely trade candidate. The 30-year-old right-hander has been an elite defenseman for the better part of the last decade with the Predators, playing big minutes and producing impressive point totals all while playing a sound defensive game.

However, Ellis does carry some concerns, including an offensive drop-off this season, an injury history, and a contract with six years and $37.5MM remaining. However, at least in the short-term, he is an outstanding addition to the Flyers’ defense corps. Their core objective this off-season was to find a mate for Ivan Provorov on the top pair and that is now complete.

Ellis, though much older and a very different style of player, is a tremendous upgrade to Myers on the Philly blue line. As a one-for-one swap, there is no question that Ellis is the better player right now and Myers will likely never reach that caliber of play either.

As for Patrick, the young forward needed a change of scenery after his first few years as a pro player have been marked by injury and inconsistency. There was some discussion that Philly could even leave Patrick exposed, given their vast number of valuable, expansion eligible forwards. By moving Patrick in this deal, the Flyers give up the upside of the former top pick, but gain protection flexibility in exchange. Leading scorer James van Riemsdyk or long-time standout Jakub Voracek, both previously expected to be exposed to the Seattle Kraken, could now step into Patrick’s vacancy.