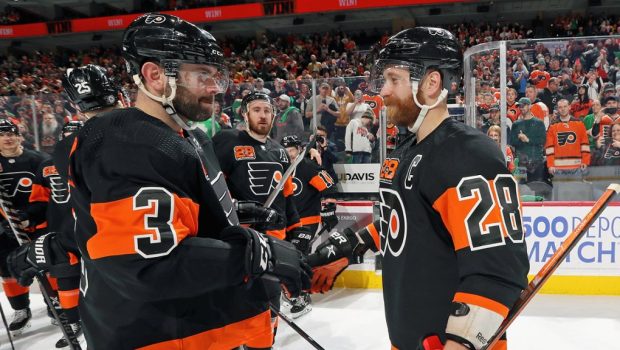 Kevin Hayes scored a tying goal late in the third period and assisted Joel Farabee’s game-winner with 1:19 remaining to lead the Flyers to a 5-4 victory over the Nashville Predators after they honored Claude Giroux for playing in his 1,000th career regular-season game.

“It was a fun night and to get the win on top of it made it more special,” Giroux said.

Travis Sanheim had a goal and an assist and James van Riemsdyk and Cam Yorkalso scored for Philadelphia, which snapped a three-game losing streak while winning for just the sixth time in the last 30 contests. After a moving pregame ceremony, Giroux was held off the scoresheet.

“We wanted to win this game for (Giroux), no matter who scored the goal or who got the assists,” Hayes said. “It’s nice to kind of make his night extra special.”

Hayes tied it with 4:15 left when the rebound from Rasmus Ristolainen’s attempt from a sharp angle was poked away by goalie Juuse Saros right into Hayes and over the goal line.

Hayes then fired a cross-ice pass to Farabee, who was wide open at the side of the crease, and he shot into the empty net for his 12th of the season. Players mobbed Giroux on the bench after a rare Flyers victory this season and he took a ceremonial lap around the ice after the victory, with the fans cheering and his teammates tapping their sticks on the ice.

“You could tell right from the get-go everyone wanted to make this a special night for him,” interim coach Mike Yeo said.

Giroux is the second Flyers player, joining Hall of Famer Bobby Clarke, to eclipse 1,000 games with the Flyers. Drafted in the first round in 2006, Giroux made his Philadelphia debut on Feb. 19, 2008, and has played his entire career with the Flyers. He has 900 career points and is ranked eighth all-time in club history with 291 goals. He helped the Flyers reach the 2010 Stanley Cup finals and was awarded the All-Star MVP this season.

Clarke presented Giroux with the silver stick to mark the occasion, and he was given a Rolex watch by his teammates and a crystal by the NHL. Giroux also has played in 85 career playoff games for Philadelphia. But the Flyers are last in the East’s Metro Division this year. This has been the worst season for the Flyers in Giroux’s tenure, and all indications are that he will be dealt to a contender prior to Monday’s trade deadline.

“I don’t get very comfortable with attention like that,” Giroux said. “Saying that, it was awesome.”