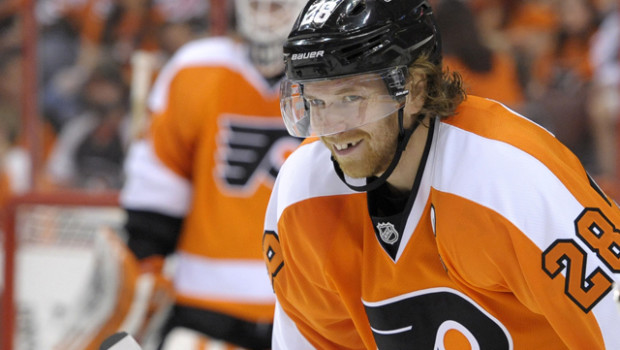 After a summer in which they did virtually nothing to improve their chances on the ice, the Flyers are preparing for training camp with delusional sugar plums dancing in their heads.

Giroux still isn’t over the Flyers losing their first round playoff series to the Rangers last April in which they lost game 7 2-1 to the eventual Stanley Cup finalists.

“Thanks for reminding me of that,” Giroux said Wednesday in a conference call with Flyers reporters. “You know what? The Rangers are a good team. They had four good lines and they have obviously a really good goaltender.

“Obviously when you see a team go that far in the playoffs it makes you think, ‘Well, it could have been us.’ Game 7, we lost 2-1. All we needed was one more goal. It’s tough to watch, but we can learn from it.”

Giroux wasn’t happy with the way the Flyers played in the playoffs. Their power play, a team strength, was just 1-for-13 in the four losses.

“We did a lot of bad things in the playoffs,” Giroux said. “We didn’t do the right things, but we’re a young team. We’re learning and we’re just going to be stronger this year.”

The Flyers finished third in their division last season behind the Pittsburgh Penguins and Rangers, which led to them not gaining home ice for the first round.

New GM Ron Hextall’s long-range plan is to build the Flyers into a perennial Cup contender. Perhaps it’ll happen in the next season or two if the Flyers’ group of young forwards keep improving. Perhaps it won’t happen until they’re young defensemen in the minors and juniors get to the NHL and develop.

Giroux was asked how far off he thinks the Flyers are from being an elite team?

“It’s hard to say in the future what’s going to happen,” he said. “One thing you can control is how hard you can work and how hard you want it. And if you do that, you’re giving yourself a chance to win. That’s how we’ve got to think.”

Giroux wanting it as much as anyone never has been an issue. His work habits as much as his talent was a reason he was just 24 when he was named captain before the 2012-13 season. Now 26, he’s as hungry as ever for team success.

“We need to want to win every single regular-season game, and that’s how we’re going to get better,”Giroux said. “Let it out there. I know it’s a lot of games, 82 … but every game going in you gotta to have a mindset that you’re going to win every game.”