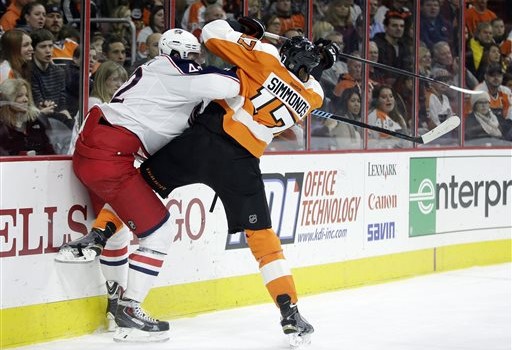 FLYERS GET A GOING-AWAY VICTORY OVER COLUMBUS 4-2

The Flyers gave their Nation a Saturday night bon voyage as they beat the Columbus Blue Jackets 4-2 before they left town for a long road trip.

Braydon Coburn had a goal and an assist as the snapped a four-game losing streak.

Brayden Schenn, Mark Streit and Wayne Simmonds (photo above) also scored for Philly (8-9-2), and Jakub Voracek had two assists to add to his NHL-leading point total to 29. Goaltender Steve Mason stopped 20 of 22 shots.

Flyers captain Claude Giroux had two assists and won 23 of 28 faceoffs. According to the Elias Sports Bureau, he’s the first player to win that many faceoffs in one game since Jonathan Toews of the Chicago Blackhawks won 23 of 28 on March 25 against the Dallas Stars.

“Any time you finish a home game before a big road trip you want to make sure that you leave a little bit confident in your game,” Giroux said. “Tonight was one of our best games in the past five, six games.”

Boone Jenner and Matt Calvert scored for the Blue Jackets (6-12-2), who were playing the second game of a back-to-back; they lost 4-3 in a shootout to the Boston Bruins at home Friday. Goalie Sergei Bobrovsky allowed four goals on 37 shots.

The Flyers were fully engaged, especially early in the third period after Calvert scored to get the Blue Jackets within 3-2 at 2:06.

Rather than sit back and defend, the Flyers pushed forward, and Coburn ended a 24-game goal drought at 3:18 of the third to re-establish their advantage.

“I think we tend to get on our heels a little bit, but the guys responded well,” Flyers coach Craig Berube said. “That’s a big thing. We’re going to give up goals, people are going to get goals. It how you respond to them that’s important.”

“I think that was the biggest difference between the game today and the games against Montreal [blew a 3-0 third period lead and lost in a shootout] and Colorado [up 4-0 after two periods but held on for 4-3 win],” Voracek said. “We sat back and waited for something to happen. Today we took it to them in the third period. We were on the forecheck, we played well, we hit, we skated. That’s why we won.”

The Flyers were feeling good after what they felt was a strong effort in a 3-2 loss to the Minnesota Wild on Thursday, and that solid play continued Saturday.

It was the kind of effort the Flyers have been waiting for, and it comes at the right time. Their rough stretch of games away from Wells Fargo Center starts with a two-game trip against the New York Islanders on Monday and Detroit Red Wings on Wednesday.

“It’s going to be a lot of road games coming up,” Voracek said. “… It’s going to be a very tough schedule. But I was saying, last year I think we had a similar schedule when we went out West. It was a tough road trip, but we were very successful, and I think that was the reason we made the playoffs. We were very good picking up some points on the road. Hopefully we’re going to do it this year.”