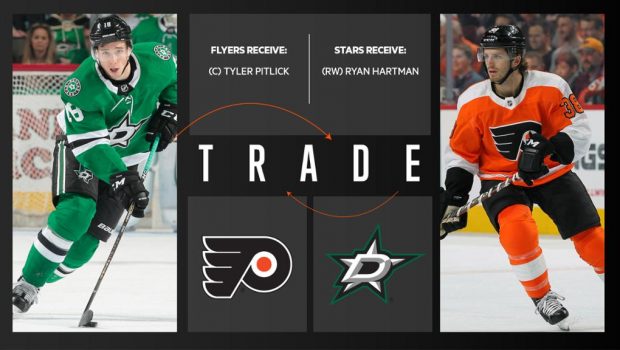 FLYERS GEARING UP TO GO FOR THE CUP: REALLY? REALLY?

That’s right. The Flyers want to pick up this season where the new Stanley Cup Champion St. Louis Blues left off.

As they prepare to begin year No. 45 since the last time it drank from the Cup, new coach Alain Vigneault and general manager Chuck Fletcher have been busy putting the pieces in place for what they hope will be a protracted run. No one would dare say a team which missed the playoffs last season, and hasn’t won a playoff series since 2011 will be parading down Broad Street next June.

“They faced a lot of adversity,” said Fletcher, who had just been on the job for little over a month and already replaced Dave Hakstol with his own interim coach, Scott Gordon, when the 16-19-4 Blues beat the 15-20-6 Flyers that night. “They brought in some new players.

“But there were still several players on that team that had been part of that core for a few years. Typically, you need a goaltender playing well and you need to have good depth.

“I think we just need to get a little bit deeper here. We have good players. We need more of them. I think if we can fill a few holes, our depth will be certainly greatly enhanced. Then we just have to keep building and hope our young guys can keep maturing.”

One thought on “FLYERS GEARING UP TO GO FOR THE CUP: REALLY? REALLY?”