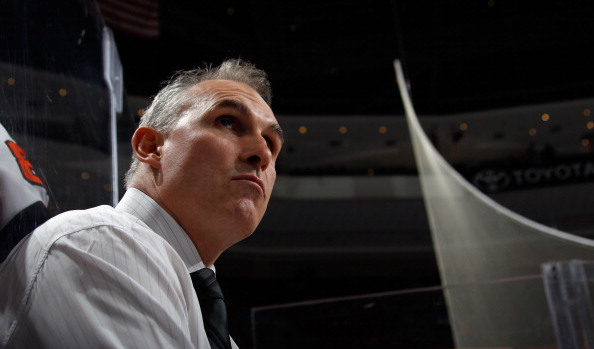 WHY TONIGHT'S FLYERS' GAME WITH MONTREAL IS A MUST-WIN

Flyers coach Craig Berube wants to avoid an 0-3 start to the season after last season’s 1-7 start got Peter Laviolette fired as coach.

Tonight’s home game with the Montreal Canadiens is crucial for the Flyers.

Which begs the question, is Oct 11 too early for Flyers Nation to panic?

The teams meet tonight at the Wells Fargo Center with the Flyers hoping to avoid their third straight 0-3 start in coach Craig Berube’s first full season on the job after replacing Peter Laviolette three games into last season.

“It’s always not the start we want,” center Claude Giroux said after recording a goal and an assist in Thursday’s 6-4 home loss to New Jersey. “We have a lot of work to do, we know that.”

The Flyers (0-2-0) are seeking some improvement at the other end of the ice after outshooting the Devils 39-26 but still allowing six goals.

“Zone entries are too easy and that starts with the defensemen obviously,” defenseman Luke Schenn told the team’s official website. “You (allow) those clean zone entries, a lot of stuff can go bad.”

Schenn is a minus-6 through two games.

Steve Mason has been in goal for both losses and allowed five goals on 25 shots against the Devils. He’s been much better against Montreal in his career with a 3-0-0 record, 1.63 goals-against average and .936 save percentage.

The Flyers will again be without Braydon Coburn, who missed the New Jersey game after suffering a lower-body injury in the opener against Boston. The defenseman will be reevaluated Monday. Initial indications estimated it being a more long-term injury, but the team is now hopeful for a quicker return.

“I’m hoping it’s short-term instead of mid-term is the best way to put it,” general manager Ron Hextall said. “Before I was thinking weeks… hopefully now it’s less than that.”

Montreal contributed to the Flyers’ slow start a season ago with an October win, but the Flyers won the last two meetings in Philly to extend their home winning streak over the Canadiens to seven.