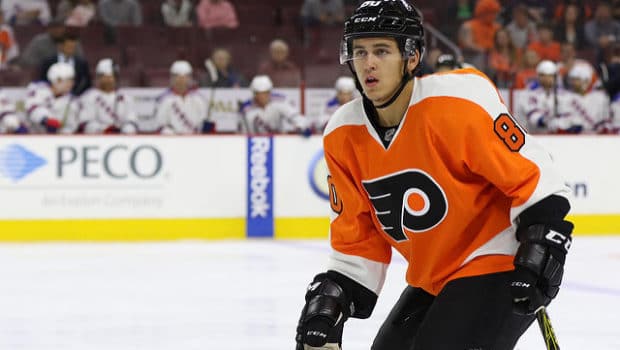 FLYERS IN FLORIDA: TRAVIS KONECNY’S MOMENT IN THE SUN!

“The way he plays, for a small guy he plays pretty heavy,” Claude Giroux said of Travis Konecny. “He skates very well, good shot, good hockey sense. If we end up playing together for a while here we have to keep working on our game together.”

Konecny, like many young players, likes to take risks.

“Especially with a younger player sometimes you start pressing a little too hard not just to create offense, but to finish,” coach Dave Hakstol said. “You can’t force it in this league. It doesn’t work. Things usually will get worse before they get better. He has that tendency but I haven’t seen that in him of late. I thought he got through that stretch in the last half dozen games or so.”

So, in the last game before the Christmas break, Hakstol put Konecny on the top line.

“I honestly wasn’t even thinking about it,” he told Courier-Post online. “I was just doing whatever I could do to contribute to the team and me, Laughts and Leirsey had a good stretch of games where we were creating a lot and getting a lot of good scoring chances.”

“The area that I want him to clean up a little bit is not feeling like he has to do too much offensively just because he’s playing with those two guys,” Hakstol said. “He’s getting the opportunity there because of the way he’s played. He’s been playing a real good hard, straight-line game. He’s been good on puck possession. He’s creating opportunities with his speed and ability to get to the net.”

“I think for me I simplify my game a lot more,” Konecny said. “I just kick pucks out, go to the net hard and just for right now I’m trying not to overthink things. It’s easy for them guys to make plays. I just did little things right and I’m sure things will start happening for me.”

0 thoughts on “FLYERS IN FLORIDA: TRAVIS KONECNY’S MOMENT IN THE SUN!”