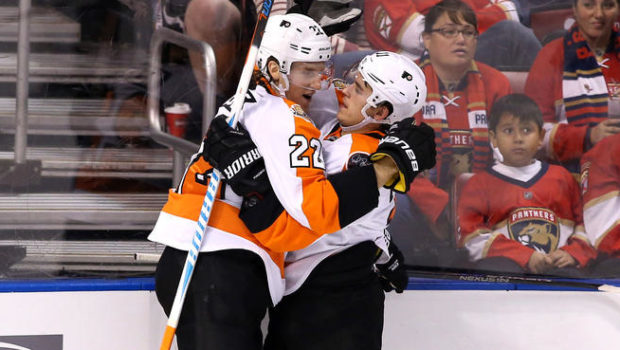 Steve Mason made 38 saves and Wayne Simmonds had a goal and an assist, helping the Flyers beat the Florida Panthers 3-1 last night.

Simmonds scored an even-strength goal in the first period and assisted Nick Cousins on the second of power-plays in the second.

Dale Weise (above) also scored for the Flyers, and rookie Travis Konecny and Brayden Schenn had assists.

Losing the puck had been a huge problem for the Flyers in a recent stretch when they lost five out of seven games. Simmonds said the aim in this one was to clean that up.

“Turnovers have killed us in the games we’ve lost,” Simmonds said. “We’ve just got to do a good job of keeping it simple, and tonight we did.

“We took what they gave us and executed.”

Mason, who improved to 8-3-2 against the Panthers, said the defense in front of him made his job easier.

“Overall, it was a really strong game from the entire team there. From a personal standpoint it felt good,” he said. “Today was good, but I’d point back to the guys up front. They did a good job of moving bodies and giving me lanes.”

Reilly Smith scored for the Panthers, who got 25 stops from Roberto Luongo.

“(The Flyers) capitalized on their chances. We made a few mistakes that proved costly,” Yandle said.

Weise added his first goal this season, a power-play tally, at 13:03 of the second. Konecy collected the puck and fired a shot from the left circle on Luongo and the rebound was backhanded into the open net by Weise to finish off the 2-on-1 break for a 2-0 lead.

Simmonds helped increase the lead in the third period when he slid a pass over to Cousins, who beat Luongo for another power-play goal and his third this season at 7:04.

The Flyers ranks third in the league on the power play.

“We give them the puck on turnovers and they went down the other end and scored. They’re (among) the top PP in the league and you can’t give them second chances,” Florida coach Gerard Gallant said. “We made some bad decisions with the puck. We turned a couple over and it goes down the other end. You have to kill the penalty; that’s the number one goal.”

Smith broke up Mason’s shutout bid when he deflected in Jonathan Marchessault’s shot at 18:09 for his fourth goal.