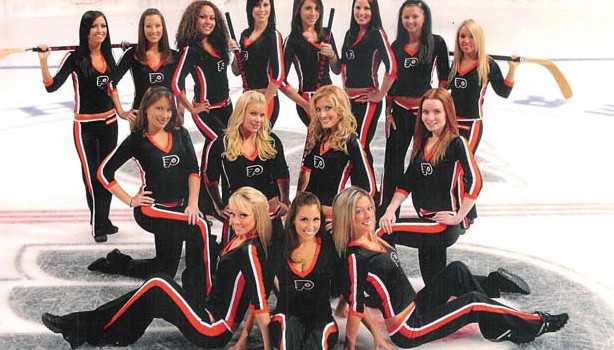 FLYERS’ FLIP-FLOP — THE ICE GIRLS ARE BACK IN TOWN

You know there isn’t much going on when the biggest news about a pro team is that it has flip-flopped on bring back the Ice Girls!

And, sure enough, the dead in the water Flyers made some news by announcing that the Ice Girls, loved by Flyers fans but fired after last season amid reported complaints, are returning for the Oct. 9 regular-season home opener against the Devils.

Actually, a new team of 10 Ice Girls will be hired from a tryout that will be held at noon on Sunday, Oct. 5 at the Flyers Skate Zone practice rink in Voorhees.

Candidates can register beforehand at PhiladelphiaFlyers.com or in-person on the day of the tryouts. Participants must be at least 18 years old.

The constant booing during the ice guys frequent on-ice appearances during the Flyers’ first two preseason games led to a change of thinking.

“When Flyers fans voice their concerns, we listen, because they are undeniably the most passionate and knowledgeable fans in all of sports,” Flyers COO of Business Operations Shawn Tilger said. “After two preseason games evaluating the program, we’ve decided to welcome the return of the Flyers Ice Team, beginning on opening night. We’ll look to assemble a team that is fan friendly, and represents the Flyers well both on the ice and in the community.”