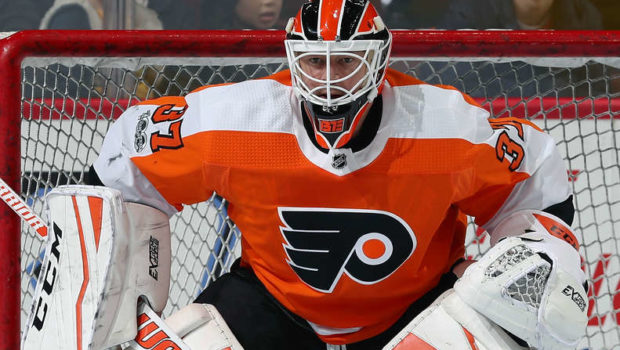 Sean Monahan recorded the first hat trick of his NHL career and Michael Frolik scored 1:18 into overtime in Calgary’s 5-4 win over Flyers.

Goaltender Mike Smith, who returned from an upper body injury, turned aside 35 of 39 shots to earn his 10th win.

Defensemen Brandon Manning and Ivan Provorov and forwards Sean Couturier and Nolan Patrick scored for the Flyers (8-8-4), who lost for the fourth straight time.

Brian Elliott (above), who appeared in 49 games for the Flames last season, recorded 27 saves in the loss for the Flyers, who allowed three power-play goals to Monahan in the second period.

“Sometimes it’s the penalties that you take that bite you a little bit,” Elliott said. “There were little breakdowns and they’re a skilled team and made us pay. We took too many penalties in the second period.”

The two teams combined for eight goals on 54 shots through the opening 40 minutes.

Manning and Provorov each scored their third goals of the season and Couturier netted his team-high 12th to give the Flyers a 3-1 lead through one period.