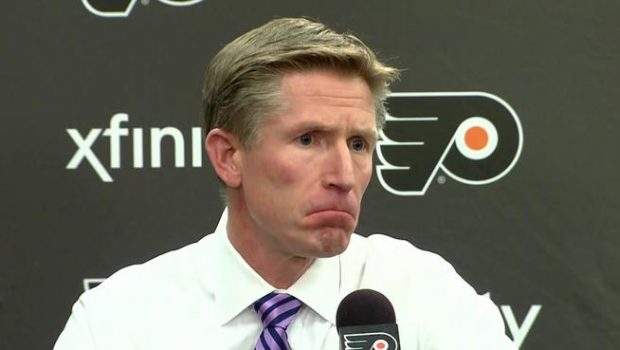 The other shoe just fell on Flyers coach Dave Hakstol.

He was fired today after the team completed a dreadful road trip out West that saw them gain all of three points.

He was replaced by Scott Gordon, the coach of Lehigh Valley in the American Hockey League.

The Flyers (12-15-4) lost the final four games of a five-game road trip (0-3-1), capped by a 5-1 loss to the Vancouver Canucks on Saturday. They’re eighth in the Metropolitan Division with 28 points, eight behind the third-place Pittsburgh Penguins.

“After meeting this morning with Dave Hakstol and thoughtful consideration, I have decided to relieve him of his duties as head coach,” general manager Chuck Fletcher said.

“As I continue to assess the team, I feel that this is the best course of action for our group moving forward. I’d like to thank Dave for his service to the team and the organization. Scott Gordon will serve as head coach on an interim basis.”