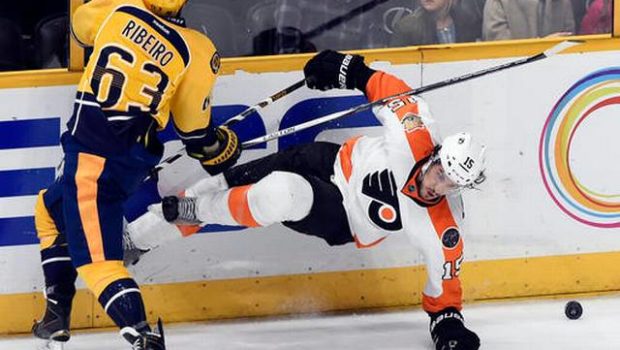 Don’t look now, but the Flyers are the hottest team in the NHL.

The Flyers (14-10-3) earned their second road victory in two days against a Central Division team. They defeated the Chicago Blackhawks 3-1 on Saturday.

The Predators (11-9-4) lost in regulation for only the second time in 12 home games this season.

“We’ve got everything clicking. Our penalty kill has done a great job, our power play has scored some big goals and (goalie Steve Mason) has been standing on his head every night,” Flyers defenseman Michael Del Zotto said. “At the start of the year, we’d have one good game and kind of get complacent. Now we’re just keeping our foot on the gas. We keep playing well, playing as five-man units.”

Simmonds, who leads the Flyers with 13 goals, scored twice against what had been a stingy Nashville penalty-kill at home. The Predators did not allow a power-play goal in their first 10 home games, but have given up three in their last two games.

“He’s doing what he does every night,” Flyers coach Dave Hakstol said. “If there’s a better guy in the league net-front, whether it’s on power play or 5-on-5, I don’t know who that is.

“What I really like about Simmer is that he’s at net-front, he’s scoring goals, he’s on the power play. But he’s a hard-nosed, 200-foot player.”

Michael Raffl gave Philly its third one-goal lead with 3:23 left in the second period. He bulled his way past Nashville defenseman Mattias Ekholm, cut across the crease and slipped the puck beyond the reach of goalie Juuse Saros for a 3-2 advantage.

Chris VandeVelde capped the scoring with an empty-net goal with 26.3 seconds remaining.

Colin Wilson tied it at 2 for the Predators with 8:41 to go in the second, lifting a short-range backhand past Mason. Mike Fisher sent Wilson in alone on goal with a nice cross-ice pass from just inside the blue line.

Nashville has 35 goals in the second period this season, one fewer than the team has totaled in the first and third combined.

It was a tough weekend for the Predators, who lost to New Jersey 5-4 in overtime Saturday after the Devils rallied from a three-goal deficit in the third period.

“Last night was a great effort until the third period and we had a meltdown there,” Nashville forward Filip Forsberg said Sunday. “That can’t happen, and today it was kind of the opposite. We started off not good and then we kind of got going as the game went. … Everyone needs the points no matter where you are in the standings and the inspiration level has to be higher from the start.”

Simmonds’ second power-play goal of the night put the Flyers up 2-1 with 13:13 left in the second period. Simmonds stationed himself in front of the Nashville net and stuffed a shot under Saros.

The Predators tied it 1-all with 16:43 left in the second when Calle Jarnkrokscored his fourth goal of the season. Jarnkrok redirected Ekholm’s drive from the blue line past Mason.

The Flyers converted on their second power play of the game to take a 1-0 lead with 1:48 left in the opening period. Brayden Schenn ripped a shot from the faceoff circle, and Simmonds’ goal-mouth deflection bounced off the knob of Saros’ stick and into the net.