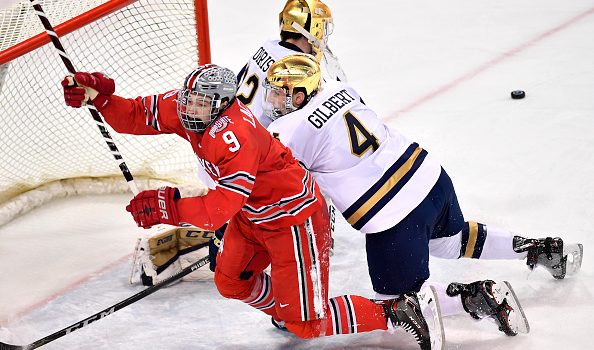 The Flyers have signed center Tanner Laczynski to an entry-level deal that starts at the beginning of the 2020-21 season.

Drafted in the sixth round, 169th overall in the 2016 NHL draft, Laczynski has spent the last four years playing for the Ohio State Buckeyes. This past season, Laczynski scored 11 goals to go along with 23 assists for 34 points in 36 games played. Over his entire collegiate career, Laczynski had 143 points in 138 career games.

Laczynski creates lanes for his teammates and always seems to find the open guy. Laczynski is also a great skater. When he is able to reach his top speed, opponents are always making sure they are aware of what he is trying to accomplish.

One thing that many people may not know about Laczynski is his ability to play a full 200-foot game. Laczynski is great at slowing the play down and setting up his teammates but he also plays a responsible defensive game. Whenever the puck is lost and transitioned the other way, Laczynski makes sure he is back helping out his defenders and goalie.

The Flyers will not put any pressure on Laczynski to develop anytime soon. With NHL ready guys toiling in the minors like Joel Farabee and Morgan Frost, Laczynski will be allowed to develop at his own pace. This is the ideal move for any organization when it comes to developing homegrown talent.