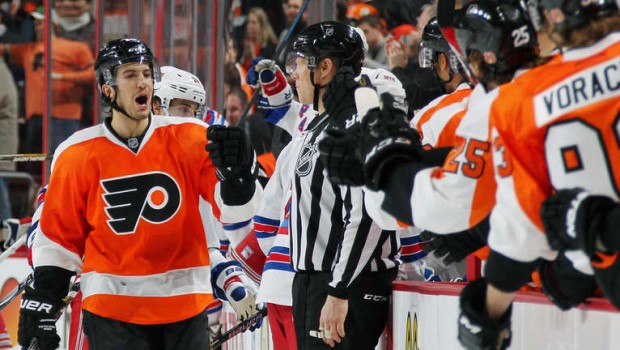 The New York Rangers have been the Flyers’ nemesis ever since New York won a seven-game first-round playoff series last spring on its way to the Stanley Cup finals. And last night’s game at the Wells had added pressure because the Flyers are scraping to get into the playoffs.

Michael Del Zotto’s shorthanded goal early in the third period (photo above) held up as the game-winner, lifting the Flyers to a 4-2 win over the Rangers.

Michael Raffl had a goal and an assist, Matt Read and Wayne Simmonds each had a goal, and Steve Mason, making his first start since Feb. 8, had 34 saves for the Flyers (27-25-11), who avoiding being swept by the Rangers in the season series. Sean Couturier had two assists.

The win ended the Flyers’ two-game losing streak and kept them within six points of the Boston Bruins for the second Eastern Conference wild-card spot into the Stanley Cup Playoffs.

J.T. Miller and John Moore scored for the Rangers, and Cam Talbot made 30 saves in his fifth straight start, 11th in 12 games.

The loss ended the Rangers’ winning streak at four games and left them second in the Metropolitan Division, two points behind the New York Islanders.

Del Zotto’s winner came while the Flyers were killing off a slashing penalty on captain Claude Giroux with 2.4 seconds remaining in the second period. Couturier held the puck in the middle of the Rangers end and sent it to a pinching Del Zotto. His shot from the left circle beat Talbot past his glove and inside the far post 1:19 into the third.

The goal was Del Zotto’s eighth in 51 games this season, more than he had in 113 games with the Rangers and Nashville Predators the previous two seasons.

Mason made the lead stand up in the third, making 12 saves, including two spectacular ones. He did the splits to stopRick Nash with his blocker on the right post with 7:04 left, and then kicked out his left pad to deny Moore in front on a give-and-go play with 6:49 remaining.

Simmonds scored an empty-net goal with 0.3 seconds remaining to close the scoring.

Raffl tied the score 2-2 with his 14th goal. The Flyers worked the puck around the Rangers zone, with Vincent Lecavaliergetting it to Braydon Coburn inside the blue line. Coburn sent a wrist shot on goal that Raffl, in the high slot, redirected past Talbot at 14:37 of the second.

“We did a good job of cycling the puck,” Raffl said. “Vinny got it to [Coburn], and I think he just fired it for a tip and I happened to tip it in.”

The Rangers took a 2-1 lead on Moore’s first goal in nearly 11 months. Dominic Moore and Tanner Glass controlled the puck deep in the Flyers zone, with Glass getting it to John Moore at the point on the left side. His slap shot deflected off Coburn’s right skate and past Mason at 11:55 of the second.

Miller tied the game 1-1 at 10:06 of the first with his sixth goal. Flyers defenseman Luke Schenn had the puck deep in the Philly zone and tried backhanding it to Nicklas Grossmann but New York’s Carl Hagelin intercepted it and found Miller cutting into the slot. Mason stopped his wrist shot but couldn’t control the rebound. Miller grabbed it, deked and scored for the first time since Dec. 29, a span of 23 games.

Read got the Flyers on the board at 9:42 of the first period because of great plays at both ends of the ice. He blocked aDan Boyle shot at the Flyers blue line and led a breakout. He sent the puck across the Rangers zone to Jakub Voracek, who centered it to Couturier. Talbot stopped Couturier’s shot but Read batted the rebound out of the air and between Talbot and the left post for his sixth goal. It was Read’s third goal in 10 games after scoring three goals in his first 52 games.

“[Couturier] shot it and there was a rebound, and the puck kind of popped up into the air,” Read said. “I swung at it and very luckily I hit it back in front of the net and swung at it again. I don’t know how it went in. I just saw it kind of rolling in behind him.”

The Rangers nearly scored seven seconds into the game when Derek Stepan’s dump-in from center ice skittered under Mason, but the goal was waved off because the Rangers were offsides. Stepan intercepted Mark Streit’s clearing pass in the neutral zone and dumped it back into the Flyers zone before Chris Kreider could clear the zone.

The Rangers won the first three games against the Flyers this season, all in November.