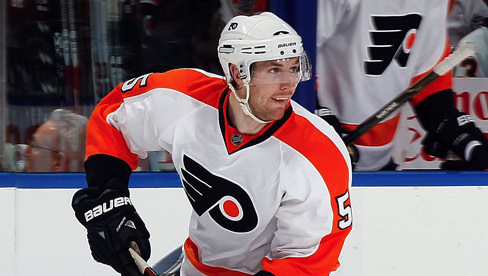 FLYERS TO FANS: WE LIED ABOUT SEVERITY OF COBURN’S INJURY

What is it about the Flyers that they treat their fans, the most loyal in the city, with such disdain?

And why do the fans, who haven’t had a Stanley Cup to cheer since 1975, roll over and take it?

Is it too much to ask that the team be honest with their fans? Forget the press, who have let the most overrated franchise in the city get away with this bait and switch for way too long.

Flyers defensemen Braydon Coburn was hurt on opening night in Boston on Oct. 6 and it was immediately thought he would be out for six-to-eight weeks with a “lower body” injury. By the way, what is that??????

Then we were told that Coburn would be out only for a few days.

And Friday came the announcement that Coburn and Andrew MacDonald each will miss approximately four weeks because of lower-body injuries.

Coburn had traveled with the team during its recent three-game road trip with the hope of him returning. He had taken part in the morning skate Oct. 18 before the Flyers’ 6-5 overtime win against the Dallas Stars, and again Oct. 21 at the Chicago Blackhawks.

Flyers general manager Ron Hextall said Coburn had a setback in his recovery, according to NJ.com.

MacDonald has three points in seven games and is second in average ice time per game at 22:55.

The absences of Coburn and MacDonald, in addition to the preseason loss of Kimmo Timonen until at least January because of blood clots, leaves the Flyers without three of the top six defensemen they thought they would enter the season with.

“You take two guys out of your lineup that play over 20 minutes, obviously it’s a big hole,” Hextall said according to the Courier-Post. “Other guys got to step up. I think Nick Schultz really stepped up for us and logged some good minutes for us. That’s something that I expected at some point but I don’t think a lot of other people did.”

The Flyers called up defenseman Shayne Gostisbehere from Lehigh Valley of the American Hockey League.