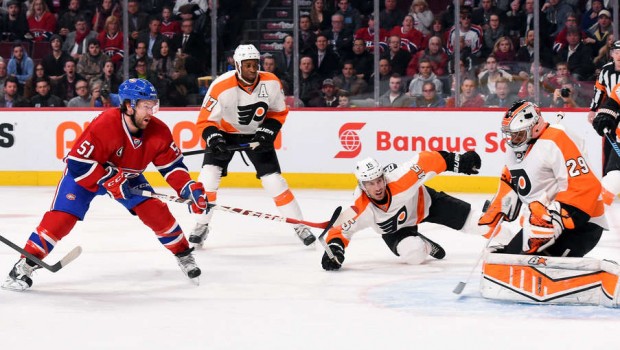 Any way you cut it, the Flyers lost a game last night in Montreal that will come back to bit them.

Trailing after allowing a goal 51 seconds into the game, the Canadiens drew even on Tomas Plekanec’s goal with 7:22 left in the third, and David Desharnais (photo above) scored with 1:33 left in overtime to give the Canadiens a 2-1 win against the Flyers at Bell Centre.

Desharnais drove in on Flyers goalie Ray Emery and scored on his own rebound to extend Montreal’s winning streak to three games.

Philly, which won 3-1 at the Washington Capitals on Sunday, has 12 points in its past seven games (5-0-2) in a bid to contend for a berth in the Stanley Cup Playoffs.

“Every point matters,” Read said. “It’s tough to swallow, coming into the third period in Montreal with a 1-0 lead, you’ve got to find a way to win that game. I thought we penalty killed well, we played well defensively. On their first goal, I think we had all five guys in front of our net and it just kind of bounced to their guy. It’s a tough break, but we have to find a way in the last six minutes there to get another lead.”

The Flyers are eight points behind the Boston Bruins for the second wild-card berth in the Eastern Conference.

“They’re a pretty desperate team,” Price said. “They’re in that hunt and they played pretty well [Tuesday]; Ray Emery played very well, gave them a chance throughout the game. We still were able to get a good number of shots on net but they did a great job of clearing rebounds and made it really difficult to get second and third opportunities.”

Plekanec drifted in from the left point while linemates Brendan Gallagher and Alex Galchenyuk jammed away at the puck in the goalmouth. When the puck came free, Plekanec put a backhand past sprawled Flyers forward Wayne Simmondsand Emery to even it at 1-1.

“I knew it went to the slot, but I thought he was going to go up and I think he kind of fanned on it,” Emery said.

“Yeah, big play,” Price said. “It’s good to see that the coaching staff has confidence to put him out there in those situations and it’s really good to see him come up with a big play, and I’m sure he’s really enjoying the moment right now.”

Read, who hadn’t scored since Dec. 11, sent a long wrist shot from the left side past Price into the top right corner of the net for his fourth goal, and first in 26 games.

Price stopped Flyers captain Claude Giroux on a breakaway during a delayed penalty call against Montreal in the first after Giroux deked and tried to tuck the puck under his left pad.

Price sprawled to his left to glove Jakub Voracek’s shot on a 2-on-1 pass from Giroux at 1:33 of the second. Price blockedSean Couturier’s shot on a breakaway moments later.

“It’s a tough building to come into, we know that’s a good team,” Emery said. “I thought we played real well again defensively. They buzzed around a bit with a bit of zone time, but we sorted it out pretty well. We had a lot of chances actually in the first half of the game; Price made some big saves.”

Emery made five saves Sunday and got credit for the win after entering the game at 11:18 of the second period to replaceSteve Mason, who left the game with a lower-body injury.