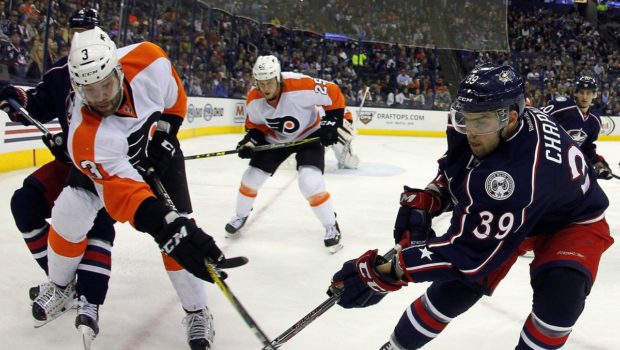 FLYERS FALL TO EX-GOALIE BOBROVSKY AND JACKETS 2-1 IN SHOOTOUT!

Pierre-Luc DuBois scored his first shootout goal, lifting the Columbus Blue Jackets to a 2-1 win over the visiting Flyers.

It was Columbus’ 11th consecutive home victory over Philly dating to 2008. Ex-Flyer Sergei Bobrovsky stopped 30 shots for his 20th win.

The Flyers dropped their second in a row and third in the past four games. Brian Elliott made 35 saves.

Columbus jumped in front on Seth Jones’ seventh goal of the season at 17:08 of the first period. Philly was whistled for too many men on the ice and Jones sent a shot through traffic for the power-play score.

The Flyers tied it in the second. Defenseman Ivan Provorov trailed the rush and scored off a shot from above the left circle at 3:56 for his fifth on the year.

The Flyers dominated possession in the second, and Jakub Voracek appeared to put the Flyers ahead 2-1 with 1:39 left. But the goal was waved off for a high stick.

“It was a hardworking game for us,” Provorov said. “We competed for 65 minutes. We had scoring chances. Just couldn’t put the puck in the net.”

DuBois beat Elliott on the goaltender’s stickside in the tiebreaker.

“I went out there with no plan,” DuBois said. “I was just going to read what the goalie does. I didn’t plan it. It just went in.”