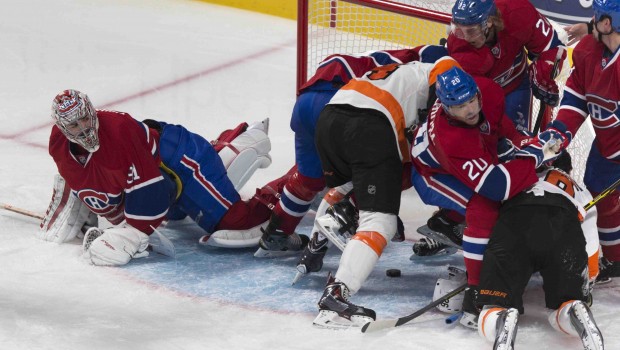 FLYERS FAIL TO PENALTY KILL IN 6-3 LOSS AT MONTREAL

The up-and-down Flyers made a valiant comeback last night in Montreal but the Canadiens’ power play held them off for a 6-3 victory.

P. A. Parenteau scored twice, including one of three power-play goals by Montreal, which extended its winning streak to five.

David Desharnais and P.K. Subban also scored on Canadiens power plays. Montreal has four power-play goals in two games after scoring three with the man advantage in its first 16 games.

Matt Read drew Philly within 4-3 at 5:38 of the third period with a power-play goal on a long scramble (photo above) that saw all four Canadiens skaters jammed in the crease along with Price.

Jakub Voracek extended his point streak to 10 games with assists on two second-period goals by Brayden Schenn that got the Flyers back in the game.

“We tried to string a comeback together, but when you give six goals up, it’s hard to come back from that,” Schenn said. “Our team defense [Saturday] wasn’t where it needed to be, and Montreal’s a good team and they come at you hard, and when you’re not going to play them tight defensively, they’re going to put pucks in the back of your net.”

Ray Emery made 22 saves for the Flyers, who also allowed three power-play goals Friday in a 4-3 loss to the Columbus Blue Jackets.

“You let six in and you’re not holding up your end of the bargain,” said Emery, who made his first start in six games.

Max Pacioretty and Andrei Markov each had two assists to help Montreal take a 2-0 lead at 8:49 of the first after Parenteau and Desharnais scored 2:02 apart on the Canadiens’ first two power-play opportunities.

Subban increased the lead to 3-0 at 6:17 of the second with Montreal’s third straight power-play goal.

“It looks like we’re getting spread out a little bit too much on the penalty kill,” Flyers coach Craig Berube said. “We’re leaving the front of the net vulnerable; it was clear [Saturday] on three goals, so we’ve got to be a lot better.”

Berube moved Schenn to the top line with Voracek and Claude Giroux in place of Wayne Simmonds and got productive results.

Voracek turned to his right and fed a pass back to Schenn to set up Philadelphia’s first goal at 12:01. Schenn snapped a shot past Price from the inside edge of the right circle for his fifth goal.

Schenn got his second straight goal, his sixth of the season, at 18:46 when he buried a rebound of Giroux’s one-timer on a pass from Voracek.

“Those guys see the ice really well,” Schenn said. “They come with a lot of speed and they’re always on the attack, so wherever I am the next game, I’ll just have to make the most of it.”

Parenteau restored the Canadiens’ two-goal lead at 4-2 after a video review confirmed that his stick had made contact with the puck below the level of the crossbar.

“I thought we did a good job of coming back after being down,” Emery said. “It’s a tough building to play in, and we gave ourselves a chance going into the third. I just kind of reflect on my game, and I wasn’t happy with it.”

Montreal battled hard to locate the puck near the crease and freeze it, without success, while attempting to kill Pacioretty’s hooking penalty at 4:33.

The puck finally came free out front to Read, who moved across to the left and shot over a sprawled Price to draw the Flyers to within 4-3 at 5:38.

“It’s a heck of a play by [Colaiacovo],” said Weise, one of the four Montreal penalty-killers on the ice for Read’s goal. “I saw it under him, and then I just couldn’t get a handle on it. I kind of tried to reach, and it’s a frustrating play, for sure.”