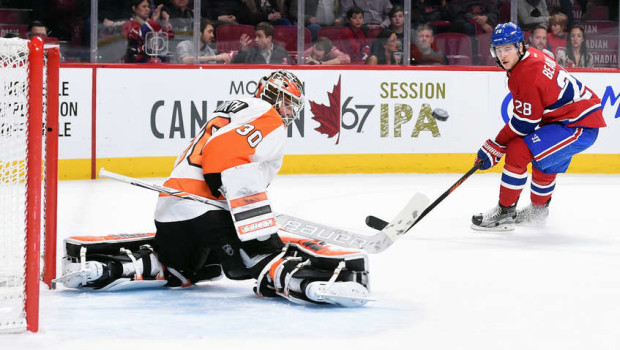 The Flyers coughed up a chance to make hay in their playoff push last night as the Montreal Canadiens’ Paul Byron scored in the fifth round of the shootout to give Montreal a 3-2 win against the Flyers on Friday at Bell Centre.

Max Pacioretty, who also scored in the shootout, drew Montreal even at 2-2 with his 21st goal on a power play at 8:35 of the third period.

Condon made 35 saves, including one with the tip of his left pad on Schenn’s backhand on a breakaway in overtime.

“I think we let the game slip through our hands a little bit. We were all over them all night. Their goalie played well,” said Shayne Gostisbehere, who extended his record point streak by an NHL rookie defensemen to 14 games with an assist on Michael Raffl’s goal at 3:15 of the third period that put the Flyers up 2-1.

Raffl was on the edge of the crease and tapped in a hard pass from Gostisbehere, whose persistence in getting Scott Laughton’s attention paid off.

“I just saw an opportunity to jump up and I screamed [Laughton’s] name about 10 times,” Gostisbehere said. “I was just happy he heard. It was a great play. I was actually going to shoot it first but then I saw [Raffl] there on the back door. It was a great play all around, starting with [Laughton].”

Philly is 2-6 in shootouts. Cousins scored the Flyers’ only goal in the tiebreaker on their first attempt when his shot hit the left post but bounced in off the back of Condon’s pad.

“Those are important points. We know that,” Flyers coach Dave Hakstol said. “If we could flip a switch and change it and turn it, we would. But obviously we weren’t able to do that tonight. I do believe a lot of it, as you go through a shootout, is feeling confident and going out there with a clear mind. For that to happen we’ve got to have some success a couple of shootouts in a row.”

Neuvirth made 29 saves in his second straight start for the Flyers. He has started three of four games since returning from an upper-body injury that sidelined him for six games.

The Flyers continue their five-game road trip at the Toronto Maple Leafs tonight.