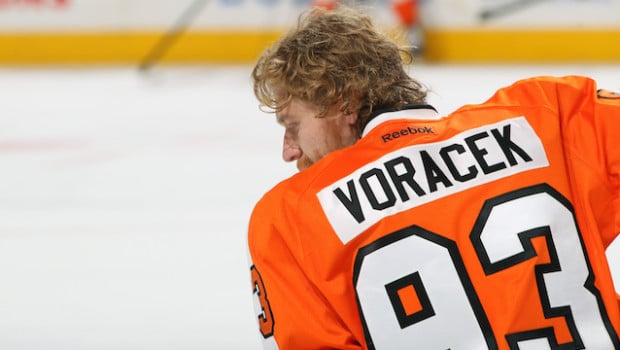 FLYERS FACE AWFUL JACKETS: 5 POINTS TO MAKE UP FOR PLAYOFFS

The bad news for the Flyers is that they are now five points behind Pittsburgh for the Eastern conference’s final playoff spot, and they are trying to make up that ground without Jakub Voracek (above) for the next week and a half.

The good news is that they play the last-place Columbus Blue Jackets tonight at the Wells.

After beating Calgary 5-3 on Monday behind Brayden Schenn’s hat trick and four assists from Claude Giroux, the Flyers (29-23-11) were blanked for a fourth time this season Thursday in a 4-0 loss to Edmonton. It marked the first time since Oct. 8, 2011, that they went scoreless on at least seven power play chances.

Voracek, whose 38 assists lead the club and 48 points rank second, sat out his second straight contest with a lower-body injury that will keep him out for at least the next five. Making matters worse, Schenn sat out the last six minutes against the Oilers after hitting his head on the ice during a scrum earlier in the third period.

Schenn, who has six of his career-high 21 goals along with six assists over his last nine, will be a game-time decision against the Blue Jackets (27-30-8) as the club evaluates his injury.

Philly sits in ninth in the East and is trying to catch rival Pittsburgh for the last wild-card spot. It had a three-game winning streak snapped against Edmonton as Michal Neuvirth tied his season high for goals allowed.

Neuvirth has a 2.83 goals-against average while making five consecutive starts despite usual No. 1 goaltender Steve Masonbeing healthy. Coach Dave Hakstol hasn’t said if Neuvirth or Mason, who won the Calder Trophy with Columbus in 2008-09, will get the start against the Blue Jackets.

“We’ve got a big job ahead of us here. We’re going to need both guys to win games for us,” Hakstol said following Friday’s practice. “I think (Mason’s) going to be ready to go whenever the call comes.”

The Blue Jackets possess plenty of offensive firepower as the only team in the NHL with four 20-goal scorers in Brandon Saad(24), Boone Jenner (23), Cam Atkinson (21) and former FlyerScott Hartnell (21).

The latter three all scored and Saad assisted on one of David Savard’s two goals during Friday’s 6-3 win over Edmonton. Columbus has scored at least six goals three times in a 4-1-1 stretch since Feb. 22.

“We have to play the same way no matter what, and for the most part, we’re doing that,” defenseman Ryan Murray said. “We’re getting better as far as situational play and making good decisions and I think we’re growing.”

Hartnell has two goals and six assists during Columbus’ five-game winning streak against his former team. The Flyers have lost their last seven trips to Columbus – the last three past regulation – since last winning there Dec. 13, 2005.

Rookie Joonas Korpisalo has made four straight starts in net for the Blue Jackets. Sergei Bobrovsky, who hasn’t played since Jan. 21 because of a lower-body injury but has been a full participant in practice, and Curtis McElhinney are potential options to complete the back-to-back set.