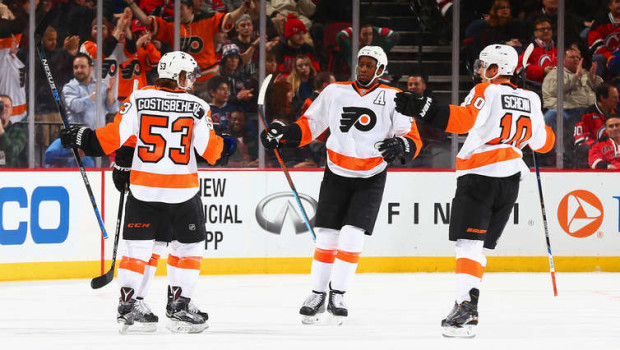 FLYERS EXPLODE TO WHIP DEVILS 6-3, 4 POINTS OUT OF PLAYOFFS

Just when you thought the Flyers couldn’t score a goal to save themselves:

Wayne Simmonds had a goal, an assist and four hits to help the Flyers to a 6-3 victory against the New Jersey Devils last night at Prudential Center.

The win left the Flyers at 60 points, just four behind the Pittsburgh Penguins for the last wild card playoff spot in the Eastern Conference.

Simmonds started the Flyers’ four-goal third period when he scored on the power play off a pass from Brayden Schenn in the slot at 12:22. Nick Cousins then scored with a snap shot 50 seconds later to give Philadelphia a 4-2 lead.

The Flyers (25-21-10) had scored two or fewer goals in five of their previous six games.

The Flyers were 6-for-7 on the penalty kill and 2-for-4 on the power play. The Devils were 5-for-11 with the man-advantage against the Flyers in their three previous games.

“Special teams were the key,” Simmonds said. “I thought our penalty kill did a great job. We gave up one, but they did a great job of blocking shots and getting pucks down 200 feet.”

The Flyers played with five defensemen for most of the game after Radko Gudas was called for a 10-minute match penalty after a hit to the head against Devils forward Bobby Farnham at 8:10 of the first period.

“When you only have five, you’re pulling for each other,” Philly defenseman Shayne Gostisbeheresaid. “You’re not going to be playing with the same partner the rest of the night, so it’s trusting your partner and a lot of communication every other shift.”

Gostisbehere, Jakub Voracek, Ryan White and Schenn also scored for the Flyers, who won for the first time in three games. Claude Giroux had three assists, and Michal Neuvirth made 21 saves.

Hakstol was proud of the effort.

“For most of the night, we had just five defenders, so there’s a lot of stress not only on the penalty kill but on those defensemen back there, energy-wise,” Hakstol said. “We did a better job in the second half of the game staying out of the box, and that helped that group of five.”

Gostisbehere scored to tie it 1-1 at 17:23 of the first period and extend his point streak to 13 games. He set the record point streak by an NHL rookie defenseman with an assist Saturday against the Devils to get to 11 games. He is seven shy of equaling the longest rookie point streak in NHL history, 20 games by Paul Stastny with the Colorado Avalanche in 2006-07.

“I’m just focused on the two points and Stanley Cup Playoffs,” Gostisbehere said. “In the past, you might have seen a Flyers team roll over and die or go to OT [after the Devils tied it 2-2], but the way we responded, it was cool. It shows what direction this team is going in.”

Tyler Kennedy, Jordin Tootoo and Kyle Palmieri scored, and Cory Schneider made 20 saves for the Devils (29-22-7), who lost for the first time in regulation this season when scoring first (20-1-4).

After Palmieri scored to make it 5-3 at 17:44, White scored into an empty net 24 seconds later. Tootoo tied it 2-2 with his first goal in 22 games 9:24 into the third off a wrist shot from the top of the right circle that beat Neuvirth on the long side.

“I think we’ll have to look at the video,” Devils coach John Hynes said. “I think our overall game wasn’t good enough in any phase. We didn’t play to our potential, so let’s figure out why and make sure we go out and get it right against the [New York] Islanders (on Friday).”

Schenn gave the Flyers a 2-1 lead at 7:55 of the second period with a power-play goal. Simmonds took a pass from Giroux and sent the puck to Schenn in the slot just before skating behind the Devils net. It was Schenn’s 17th goal of the season and third in the past four games.

Hakstol changed his line combinations, putting Schenn alongside Giroux and Simmonds, and Voracek with R.J. Umberger and Cousins. The line of Giroux centering Simmonds and Voracek had combined for 18 goals and 48 points in the past 15 games.

“I’ve played a lot with [Simmonds], but not recently,” Schenn sasid. “I know what he’s all about. He’s a straight-line hockey player. He’s going to win his battles and go in front of the net. He’s really easy to play with and having an opportunity to play with him and Giroux, I just tried to make the most of it and I think we did a pretty good job.”

The Flyers killed a 5-on-3 power-play for the Devils for 1:05 early in the second with Pierre-Edouard Bellemare (tripping) and Ryan White (cross checking) each in the box. Devils right wing Kyle Palmieri was called for holding at 6:42 to negate a 5-on-4 advantage for New Jersey.

An eventful first period included a goal by each team. Kennedy scored his first goal in 31 games with the Devils on the power play at 12:01. It was Kennedy’s first goal in 41 games, dating to March 13, 2015. The goal came during a five-minute power play after Gudas was called for his match penalty.