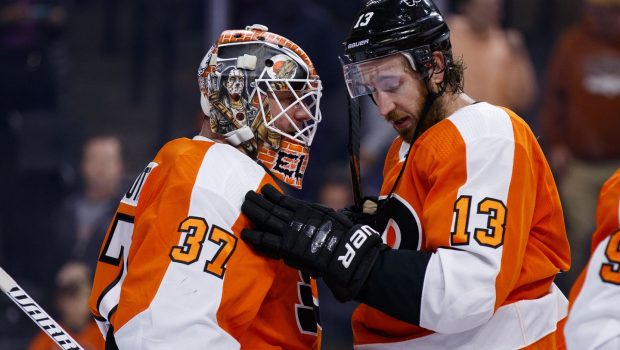 FLYERS EXPLODE FOR 5 GOALS IN 9 MINUTES TO JOLT JACKETS!

Kevin Hayes (above right with Broan Elliott) scored the go-ahead short-handed goal and the Flyers exploded past the Columbus Blue Jackets 7-4.

“When you have five goals in nine minutes, it’s just an example of sticking to it,” Hayes said. “We’re getting a lot of shots on net each night and that’s been big for us.”

Hayes and Ivan Provorov also each had two assists, and Elliott finished with 22 saves to help the Flyers end a five-game losing streak to their Metropolitan Division rivals.

The five goal outburst was the Flyers’ first in a third period since Dec. 19, 2013, when they rallied to beat Columbus 5-4.

“I thought we deserved to win this game,” Flyers coach Alain Vigneault said. “We were the better team. We had a real strong second period, tied it up, saw them score one (at the end of the second) and one (early in the third) to take the lead. But we said that we were going to find a way to win this game and we did.”

Anderson’s goal 2:15 into the third period gave the Blue Jackets a 4-2 lead.

The Flyers then scored five times in an 8:54 stretch in the latter half of the period to get the win.

“After that goal we got to have a push and stay on it,” Jenner said. “I don’t think we did that tonight and they were able to come back.”

Gostisbehere got the rally started with a slap shot with 9:08 remaining, and van Riemsdyk tipped in his second of the night to tie the score with 7:23 to go.

“The biggest thing was how we responded going down two goals in the third,” Gostisbehere said. “Maybe some past games, we would have folded and gave that one away. I think it was a big character win. Got from everyone tonight so it was huge.”

While killing off a tripping penalty on Sean Couturier, Hayes stuck his stick in a Columbus passing lane, picked up the puck at center ice and then backhanded it past Korpisalo with 5:36 left for his fourth of the season and his third in the last three games.

Raffl had an empty-netter to make it 6-4 with 1:39 remaining, and Konecny capped the scoring with the Flyers’ second power-play goal of the night in the final minute.