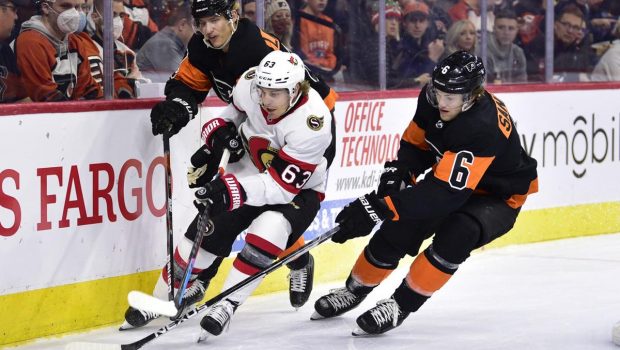 Travis Sanheim scored 1:35 into overtime on a pass from Cam Atkinson to lift the Flyers to a 4-3 victory over the Ottawa Senators .

Claude Giroux, Oskar Lindblom and Joel Farabee also scored for the Flyers, who have won four of five. Giroux moved into a tie for second on the franchise’s all-time scoring list.

Backup goalie Martin Jones started in place of Carter Hart, who missed the contest due to a non-COVID illness, and made 28 saves.

Artem Zub’s slap shot from the point through a screen in front gave the Senators a 3-2 lead with 6:17 left in regulation. Farabee, returning to Philadelphia’s lineup after a seven-game absence due to a shoulder injury, evened the score just 52 seconds later with an unlikely goal when he threw the puck toward the net from the side boards and it got past Forsberg.

“Got a little lucky but when you’re doing the right things bounces like that definitely help,” Farabee said.

The Flyers played a strong first period and went to the dressing room ahead 2-0 after goals by Giroux and Lindblom, who got his third of the season on a slap shot from above the circle that deflected off Ottawa defenseman Thomas Chabot and past Forsberg.

The Senators couldn’t generate anything offensively in the early going and didn’t get their first shot on goal until there was 6:21 remaining in the first.