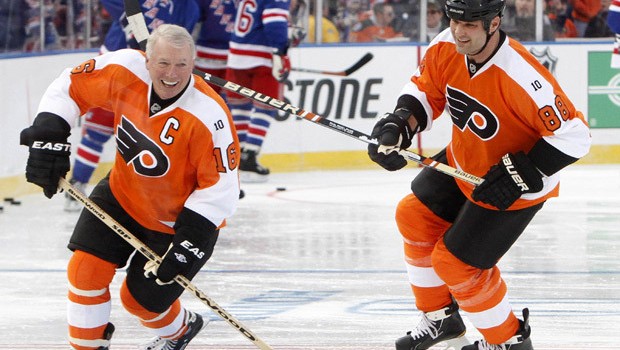 Clarke (left) and Lindros skating together at 2011 Winter Classic.

All Eric Lindros needed was to hear the cheers from the Flyers’ faithful.

Once the former Flyers captain and the franchise reconciled before that 2011 alumni game before the Winter Classic, each side promised that Lindros would be back in the fold and become an appreciated — and no longer ignored — part of team history.

Lindros returns Thursday night to the Wells Fargo Center when he is inducted into the Flyers Hall of Fame. Lindros has some company for the big night: Legion of Doom linemate John LeClair is set for induction with him before the Flyers host Minnesota.

“We were both deeply honored to get the call,” Lindros said. “Then we started talking more about it and decided to do it together, which we thought was appropriate. So here we are and we are looking forward to that night.”

Lindros seemed like a surefire Hall of Fame inductee in the 1990s when he was scoring 40 goals, winning league MVP honors and took the Flyers to the 1997 Stanley Cup finals.

But a fallout with the franchise over the handling of Lindros’ multiple concussions forced the team to trade him. The organization then did little to recognize his achievements for most of the next decade.

“I don’t care if I talk to Eric for the rest of my life — it won’t kill me,” Flyers general manager Bobby Clarke, a Hall of Famer center, said in the months leading up the 2001 trade to New York.

Those bitter days are over. Lindros and Clarke have made peace — Clarke has even stumped for Lindros to make the hockey Hall of Fame.

Knowing one of the greats had to be included on a star-studded roster, former general manager Paul Holmgren reached out to Lindros to ask about playing in the Winter Classic alumni game at Citizens Bank Park.

The crowd went wild as Lindros made a triumphant return to the city in his familiar No. 88 jersey.

Lindros, a six-time NHL All-Star, wanted to move on from the ugly end of his tenure. 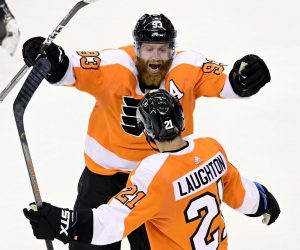