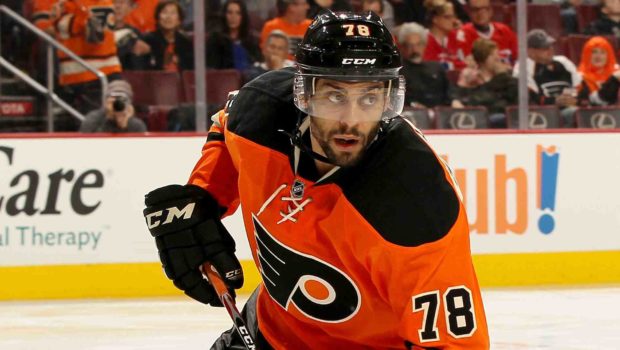 FLYERS ARE ENDING WOEFUL SEASON ON A BLUE NOTE!

The Flyers (38-33-9, 85 points) will be watching the postseason for the third time in five years and only their draft position will be determined in their final two games.

But tonight’s game has more at stake. The Columbus Blue Jackets have lost five games in a row and will be forced to start the playoffs in Pittsburgh despite having the fourth-best record in the NHL.

“We’re fine,” Blue Jackets coach John Tortorella told The Columbus Dispatch. “I think you think we need some therapy or something like that. We’re fine.”

The Blue Jackets are not fine, at least from an injury perspective. Their top-pair defenseman, Zach Werenski, is out with a shoulder injury suffered Sunday. He has been replaced by rookie Markus Nutivaara on a top unit with Seth Jones. Nutivaara, who has been in and out of the lineup this season, has also been manning the point on the Jackets’ second power-play unit.

The Jackets have also recalled defenseman Gabriel Carlsson for their final two regular-season games against the Flyers and Maple Leafs.

Between the pipes, the Blue Jackets are expected to turn to former Flyers netminder Sergei Bobrovsky, who was given the night off on Thursday when the Jackets fell 5-4 to the Winnipeg Jets. Bobrovsky ranks second among NHL goalies in wins (41), first in GAA (2.02) and first in save percentage (.933), but has lost his last three starts and has allowed nine goals in those losses.

With just one more game on Sunday, Tortorella needs to decide whether he wants Bobrovsky to start in Philly tonight or in Toronto on Sunday in his final tuneup before facing the Penguins in the first round of the playoffs.

Flyers captain Claude Giroux (14 goals, 57 points) is finishing up his least productive season since his first full year in the NHL, when he managed 16 goals and 47 assists in 2009-10.

Giroux’s name has been mentioned in trade rumors recently, although it appears unlikely the Flyers would move their 29-year-old captain, who has five years and more than $41 million remaining on his contract.

“When you don’t make the playoffs, everything is possible,” Giroux said. “But at the end of the day, that’s not our job and not things we want to focus on. We have to focus on just getting better.

“I’ve been in Philly for nine years and I don’t plan on leaving. Like I said, it’s not for me to