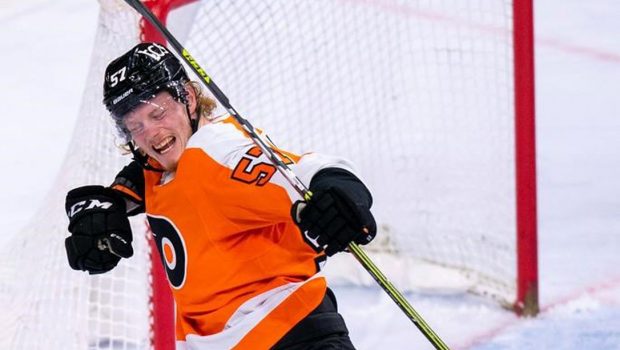 FLYERS DROP LIKE FLIES: LACZYNSKI OUT FOR SEASON, ALLISON IFFY!

The Flyers are still playing exos, with the regular season tipping off in 15 nights against Vancouver at the Wells.

And they are going to be without center Tanner Laczynski for the season and right wing Wade Allison for the immediate future and maybe more because of a bum ankle.

Laczynski had hip surgery to repair a torn labrum last April, and now he has injured the opposite hip and needs another surgery.

Flyers coach Alain Vigneault said yesterday that it was his “understanding” that Laczynski, is likely to get surgery on his left hip, too.

“He came to camp last year,” Vigneault said. “He was hurt. Played a couple of games in the American League. Came back with us, got hurt again … very unfortunate. I think the people in the organization think very highly of him, but I haven’t seen him play very much. He’s been injured.”

Allison sprained his right ankle in the Flyers’ second rookie exhibition game against the New York Rangers on Sep. 19 when he fell awkwardly into the boards.

According to Vigneault, Allison is in the process of discussing whether he needs surgery with another doctor.