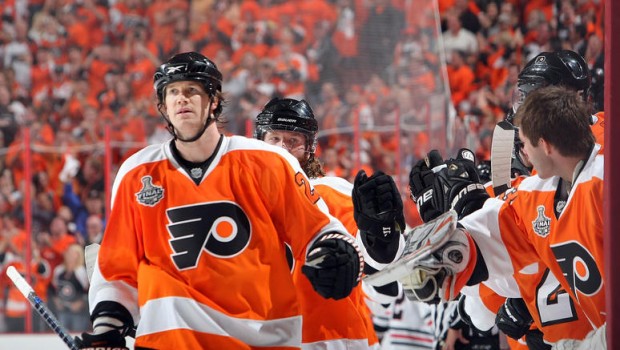 THE FLYERS DREAM-ON MACHINE! WHAT IF CHRIS PRONGER HAD NEVER GOTTEN HURT!

Pronger came to the Flyers on the first day of the 2009 Entry Draft, in a trade which sent the now-unremarkable Joffrey Lupul and Luca Sbisa to Anaheim along with two first round picks.

At that point, the stage was set. The Flyers were a team pretty loaded with young front-end talent and now they had one of the best defensemen in the league anchoring the blueline. And it worked! The Flyers made it all the way to the Stanley Cup Final in Pronger’s first season with the team – that was kind of Chris’ thing, dragging his new team to the Final – and despite losing to the Blackhawks in six games, the future was bright for the Flyers. Pronger played only 50 games that next season, due to a number of injuries, most notably to his knee. The Flyers lost in the second round to the Bruins, and it was on to the offseason. Despite falling short in the 2010-2011 season, this was still a team with a talented young core and a relatively solid defense: