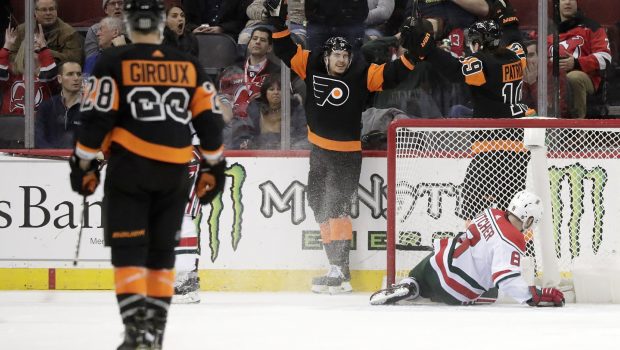 FLYERS DOWN DEVILS TO PULL WITHIN 5 POINTS OF 2ND WILD CARD!

By Julie Glass and the Associated Press

Travis Konecny and Sean Couturier scored in a 57-second span and the Flyers set an NHL record by using an eighth different goaltender in posting a 6-3 victory over the New Jersey Devils.

“Every point is huge for us right now so we just want to keep doing our job and taking care of our business and we’ll see where things stack up at the end of the year,” said James van Riemsdyk, who like Konecny scored two goals.

The win was the Flyers’ 15th in the past 20 games (15-3-2) and moved them within five points of idle Columbus in the race for the second wild-card spot in the Eastern Conference.

“It wasn’t easy or pretty but found a way to win and that’s all that matters,” Couturier said after the Flyers got three of four points playing back-to-back games. “I don’t know if fatigue was a factor, no excuses. We needed the points and found a way to get them.”

Cam Talbot made 30 saves in becoming the NHL record-setting eighth goaltender for the Flyers this season.

“Obviously things didn’t turn out the way I had hoped in Edmonton but it’s nice to get a fresh start on a team that is playing extremely well right now,” said Talbot, who was acquired in a trade about two weeks ago. “So I’m coming in and trying to keep my head down and not to mess with the chemistry here and try to contribute any chance I can get like tonight.”

Damon Severson and Jesper Bratt scored for the Devils, who rallied from a 2-0 deficit to tie the game. Cory Schneider made 18 saves. Kevin Rooney, who had the Flyers’ go-ahead goal go off his skate, closed out the scoring with his second goal in as many games.

Konecny’s hustle and a little luck allowed the Flyers to take a 3-2 lead with 30 seconds left in the second period. The center outraced the Devils defense to nullify an icing, forcing Schneider to play the puck. His clearing pass, hit off Konecny’s skate and then caromed off Rooney’s skate into the net.

“I felt like I gave one away for my teammates,” Schneider said. “It was a winnable game. I thought we had control of it at the end of the second period there and between that one and the one at the start of the third, it’s unacceptable to let in goals on my part.”

Couturier increased the lead to 4-2 when he took a drop pass from Claude Giroux and beat Schneider 27 seconds into the final period.

Provorov scored on a deflection at 6:33 and Konecny added an empty-net goal with 3:48 to play after the Devils pulled their goalie down three goals.

“Unfortunately the puck went into the net for us too easily, some odd bounces,” Devils coach John Hynes said. “We’re not a team that can afford that and go and make up for it.”

Talbot, who started the night with a breakaway stop on a short-handed effort by Blake Coleman, gave up both Devils goals after giving up big rebounds in the opening 8:49 of the second period.

Van Riemsdyk scored on a shot from between the circles on a power play at 12:53 of the first, and got his 19th on the season putting a blind pass from Ryan Hartman into an open net.