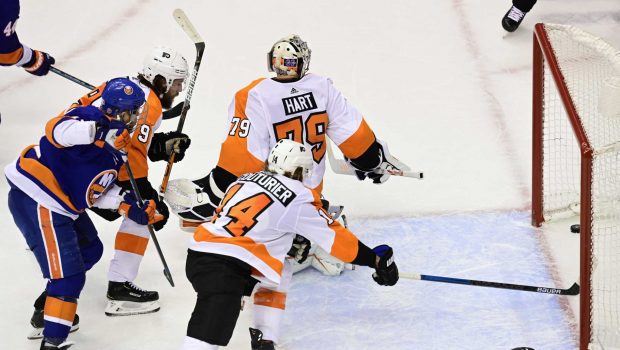 FLYERS DOWN 3-1 IN SERIES, AND THEY ARE LOOKING LIKE TOAST!

The Flyers came into this second-round NHL bubble series against the Isles on a high after crushing the Canadiens in the first round.

But the Isles are now up 3 games to 1 and Philly is looking like toast.

Jean-Gabriel Pageau scored the go-ahead goal 7:18 into the third period, and Thomas Greiss stopped 36 shots – including 16 in the second period – to push the Islanders within a win of advancing to the Eastern Conference finals following a 3-2 victory.

Brock Nelson scored twice, both set up by Josh Bailey, and the Islanders gained a 3-1 lead of the best-of-seven second-round series with Game 5 set for tomorrow night.

New York is seeking to make its first conference finals appearance since 1993, when the Islanders lost to Montreal to six games.

Sean Couturier and Ivan Provorov scored for the East’s top-seeded Flyers, who lost consecutive games for the first time since an 0-3-1 skid from Dec. 31-Jan. 7. The Flyers also went with backup Brian Elliott, who stopped 30 shots in place of Carter Hart.

Though Provorov scored with 64 seconds left and the Flyers net empty, Philly managed just one more shot on goal, as the Islanders muddled up the puck in their own corner for much of the final 20 seconds.

Though the Flyers finished out-shooting the Islanders 38-33, a lack of finish and defensive breakdowns cost them.

”We busted a gut out there. We worked our (rears) off from the start of the game till the end,” coach Alain Vigneault said. ”In the third period, we made a couple of mistakes and they made us pay for it. We had some looks and just couldn’t find a way to put more than we did past their goaltender.”

The Flyers were caught flat-footed in allowing Pageau to sneak in behind them.

Defenseman Scott Mayfield jumped into the rush to set up the go-ahead goal. Accepting a pass from Devon Toews, Mayfield fed Pageau for a breakaway. Pageau drove down the middle and sneaked a shot through Elliott’s legs, with the puck having enough spin on it to dribble over the goal line.

This is the type of clutch production the Islanders were seeking in giving up three draft picks, including a condition first-rounder this year, to acquire the 27-year-old play-maker from Ottawa on Feb. 24.

”The payoff for him is obviously paying off right away,” Nelson said of Pageau. ”He’s a guy you can lean on in any situation. He kind of does it all. He’s a guy you appreciate and love to have him on your team.”

Nelson made it 3-1 by scoring four-minutes later by completing a give-and-go with Bailey on a two-on-one break. Driving the Flyers zone up the right wing, Nelson fed Bailey, who returned the pass allowing Nelson to tap the puck in the open left side.

Greiss, meantime, was sharp throughout. Midway through the first period, he kicked out his right pad to foil Joel Farabee’s redirection. With two minutes left in the second period, Greiss shot up his glove to stop Kevin Hayes snap shot off a faceoff.

The Flyers’ offense has essentially dried up, with captain Claude Giroux having yet to score this postseason.

After combining for 11 goals in sweeping the top-seeded playoff-opening round-robin three-game series, Philadelphia has managed just 18 in its past 10 outings.

”We have to find ways to score a goal,” said Giroux, who played a big role in setting up Couturier’s goal, even though it didn’t lead to an assist. ”Obviously, a little frustrated. Not too sure what to say. I know I can play better.”