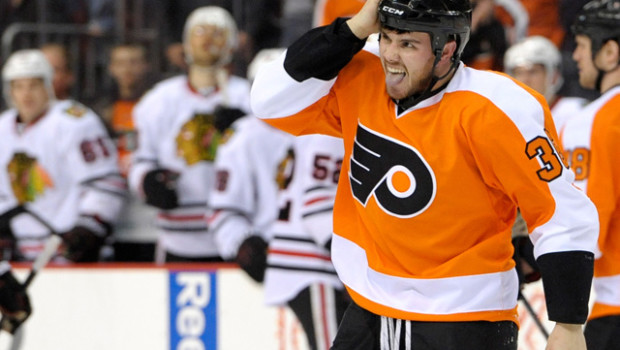 Zac Rinaldo is a bit of a bully boy.

It’s the kind of reputation Flyers teams have been known for since the Broad Street Bullies days 40 years ago and apparently the team still puts a fair amount of value in that.

Rinaldo was signed to a two-year extension that will keep him with the club through the 2016-17 season.

The 24-year-old tough guy still had one year remaining on his current contract and was due to become a restricted free agent after the 2014-15 campaign.

Rinaldo hasn’t given the Flyers much in the way of points with just 18 over 165 career games with the club, but he sure has racked up the penalty minutes. Since entering the league in 2011-12, only one player has more PIMs than Rinaldo’s 470 – Ottawa enforcer Chris Neil, who has 533.

Like fighting or not, it’s part of the game today and while some teams are shying away from keeping around enforcers, one would never expect the Flyers to follow suit there.

Over his career, Rinaldo has averaged just 7:44 per game. Hovering between fourth liner and healthy scratch, he does most of his on-ice work with his fists. Rinaldo has been involved in 27 fights over his three-year NHL career.

Rinaldo also has been twice suspended in his career for illegal hits. Most recently he was docked four games last season for a check to the head on Buffalo defenseman Chad Ruhwedel.

The pugilists aren’t typically guys who receive multi-year extensions with years remaining on his contract and even Rinaldo was surprised to have been approached for an extension.

“I’m surprised that we’d even started to talk about it so early, but I am thrilled,” Rinaldo told the Flyers’ team website. “Philadelphia is where I started my NHL career and this is where I want to be so I am really happy. This definitely gives me a lot of confidence by the Flyers showing that they have confidence in me. I know they want to see me get better as a player, and this is the place to do it.”

Rinaldo has been part of the Flyers organization since he was drafted in the sixth round, 178th overall in the 2008 NHL Entry Draft.

As new rules designed to limit fighting come around and more teams have success without a designated enforcer, that role may die out in the NHL eventually. With that said, even if the enforcer is becoming endangered, you can probably bet that the Flyers will be one of the last teams to allow them to go extinct.