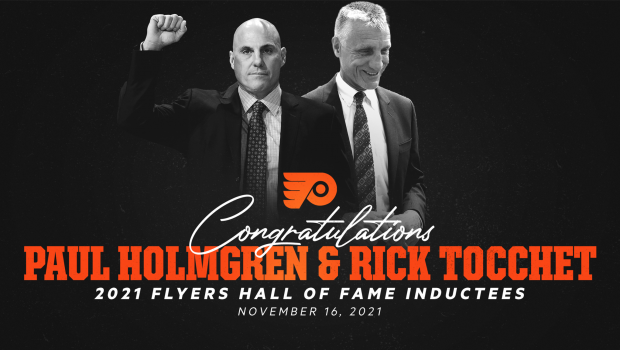 FLYERS DOING WHAT THEY DO BEST: HONORING THE PAST!

The Flyers will induct Paul Holmgren and Rick Tocchet into the Flyers Hall of Fame during a pregame ceremony on Tuesday, Nov. 16, before the Flyers play the Calgary Flames.

As a player, Holmgren recorded 138 goals and 171 assist for 309 points in 500 games in Orange & Black. He was a member of the Flyers during their historic 35-game unbeaten streak and Stanley Cup Final appearance during the 1979-80 season, when he scored a career-high 30 goals. He ranks second in Flyers history with 1,600 penalty minutes and he played in the 1981 NHL All-Star Game.

Tocchet played parts of 11 seasons with the Flyers, including one season as captain, where he recorded 232 goals and 276 assists for 508 points in 621 career regular season games. He is also the Flyers all-time leader in penalty minutes (1,815).

He was a member of the Flyers team that reached the Stanley Cup Final and won the Eastern Conference Championship in 1985 and 1987. His 27 goals and 60 points in the Stanley Cup playoffs both rank 10th in franchise history. His postseason totals with the Flyers include 60 points (27g-33a) in 95 Stanley Cup Playoff games.