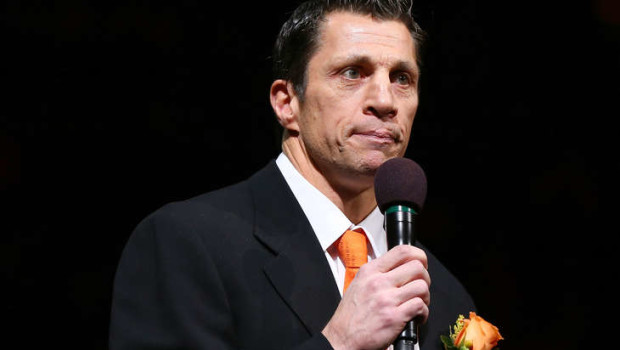 FLYERS DO WHAT THEY DO BEST: CELEBRATE PAST, ROD BRIND’AMOUR!

The Flyers are terrible on the ice this season, so last night they did what they always do to distract their fans:

Pay homage to their past.

Rod Brind’Amour felt he never had a proper chance to say goodbye when the Flyers traded him to the Carolina Hurricanes.

Prior to the last night’s game between Flyers and Hurricanes on Brind’Amour thanked the people that were most important to him during his nine seasons with the Flyers when he is inducted into their Hall of Fame.

“I left Philadelphia and it kind of felt kind of weird,” Brind’Amour said. “One day I was there and then I was gone and that was it, and I never got the chance to thank the people that meant so much to me there. So this is kind of a long time coming for that. But it is great for me to do, to be able to thank the people that made Philadelphia great for me.”

Brind’Amour played 633 regular-season games with the Flyers, and ranks in their top 10 in goals (235), assists (366) and points (601). He scored at least 30 goals four times, represented Philadelphia in the 1992 NHL All-Star Game, and his 484 consecutive games played is a Flyers record. He also had 24 goals and 51 points in 57 Stanley Cup Playoff games, and was the second-line center on teams that went to the 1995 Eastern Conference Final and the 1997 Stanley Cup Final.

As strong as his play was, Brind’Amour was renowned for his work ethic on and off the ice.

“He’s probably as hard a working athlete as certainly I’d ever seen,” said Flyers general manager Ron Hextall, a teammate for six seasons. “On the ice, off the ice, in-season, offseason. He worked at his game after practice off the ice, after practice on the ice, before practice; he was a machine. It was phenomenal to watch as a guy and what a great example for everyone else. … It was day after day. There was never a day off. There was never a time where his intensity or work ethic ever dropped off. It was almost machine-like.”

For Brind’Amour that mentality began long before he got to Philadelphia.

“I started that kind of trend when I was younger and it was just instilled to me as a kid that if I wanted to make the NHL or just to be good as a hockey player I knew that I had to do more than the next kid,” he said. “The one thing I could control was how hard I worked. I just never wanted to leave anything on the table so I just always found myself kind of finding the hardest-working player and trying to make sure I was working harder than him.”

Brind’Amour’s work ethic made him a leader in Philadelphia and a role model for his teammates.

“He was a quiet leader who led by example,” said NBC Sports analyst Keith Jones, who played two seasons with Brind’Amour. “When he did have something to say he wasn’t shy about saying it but that wasn’t very often. Rod was very focused on his own preparation. And the way that he prepared was something that other players, younger players especially, would look at and go, ‘Wow.’ He was an eye-opening player for younger guys that were entering the League in what it took to become as good as he was. It wasn’t about what he was born with. It’s what he worked with.”

Brind’Amour broke his foot during a preseason game in 1999, which sidelined him for three months and ended his consecutive-games played streak. He returned just before Christmas, and after 12 games the Flyers traded him to the Hurricanes on Jan. 23, 2000, for Keith Primeau.

Though Brind’Amour was disappointed to leave the Flyers, he had some of his best seasons with the Hurricanes. He captained them to the 2006 Stanley Cup and won the Selke Trophy in 2006 and 2007. Since retiring in 2010 he has worked for the Hurricanes and is in his fifth season as an assistant coach.

He’s focused on helping the Hurricanes but for one night will recognize his past.

“Honestly I was just really disappointed to be traded from Philadelphia,” Brind’Amour said. “It took me a while to get over it but I should have known better; it’s hockey [and] I had been traded once before. … There was no animosity, at least for me. For me it’s just an honor and I’m just thankful that they’re even having this night.”