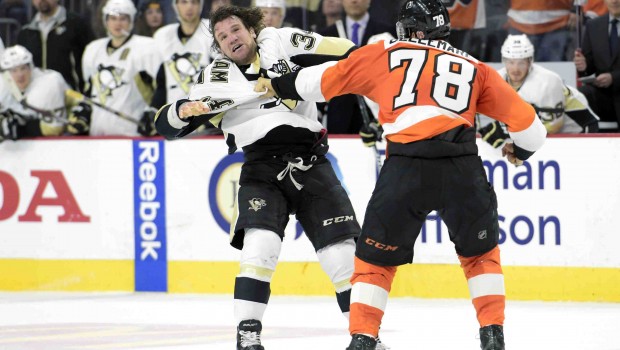 You gotta hand it to Claude Giroux.

The captain of the woebegone Flyers will do anything to jolt the team out of its awfulness:

Even starting a fight with the dreaded and hated Pittsburgh Penguins.

And that’s exactly what happened Tuesday night at the Wells when the Flyers beat Pittsburgh 3-2.

Giroux’s idea was plot to jumpstart the Flyers was concocted over dinner at a City Center Philly steakhouse Monday night.

Giroux, their lead-by-example captain, was there with Michael Del Zotto, Nicklas Grossmann and the Schenn brothers, Luke and Brayden.

That’s when Giroux spoke up to suggest in a joking way that maybe what the Flyers really needed was a night of fighting with the hated rival Penguins coming to town for the first time this season.

“It’s not like we thought, ‘Hey, it’s the Pittsburgh Penguins … but it’s funny who it worked out that way,” Flyers defenseman Luke Schenn said.

Oh, it worked out that way, as the Flyers got into four fights before rallying for a 3-2 overtime victory on a game-winning power-play goal by Giroux.

“We were actually talking maybe we need to do something like that,” defenseman Luke Schenn said. “That kind of helped us last year turn things around when Ray Emery started something against Washington.”

These Flyers had just flown back into Philadelphia following their Monday matinee loss on Long Island when five of their players went out for dinner.

They talked about their season-long struggles when Giroux mentioned fighting the Penguins a few times might do them some good.

“It wasn’t like we were planning it, but we joked that maybe this is what we need because we’re frustrated,” Luke Schenn said. “We can’t score goals, we let too many in.”

All of the fighting occurred in the second period when Michael Raffl, Jakub Voracek, Pierre-Edouard Bellemare and Luke Schenn dropped the gloves.

You’re not going to get fighting like that every game, but every once in awhile it’s good for guys to stick up for one another,” Luke Schenn said. “Guys obviously had a little anger built up. Between that and the rivalry with the Penguins, it brings out the best in both teams … physically, mentally, emotionally. Those are the games that you really get up for.”

Setting the tone was — who else? — Flyers bad-boy left wing Zac Rinaldo jumping into Penguins star defenseman Kris Letang for a shoulder-to-the-back check 15:36 into the game with his team ahead 1-0.

Letang ended up smashing his right shoulder and face into the glass, which ended his night, and Rinaldo was done for the night, too, after getting a five-minute major and game misconduct.

“I changed the game because we ended up winning,” said Rinaldo, who is expecting a lengthy league suspension for his hit. “I might have changed the whole season.”

That’s probably stretching it, but the Flyers did kill off his long penalty and win to go into the All-Star break on a high despite their record still being a very disappointing 19-22-7.

The Flyers, who racked up a season-high 59 penalty minutes to the Penguins’ 34, definitely played more inspired hockey on the night in which they won despite being outshot 13-0 in the first 12 minutes and after falling behind 2-1 early in the third period.

The fighting really fired up the Flyers, and even some of their usually mild-mannered players threw punches.

Voracek, the NHL scoring leader, fought for the second time in his seven seasons and badly beat up first-time-fighting veteran defenseman Rob Scuderi after starting a fight because he was pulled down on a hip check.

“At that moment I thought it was bad, but it wasn’t,” said Voracek, who was given five minutes for fighting plus a two-minute minor for instigating and a 10-minute misconduct. “I got kind fired up there though. I had trouble with the knee (in the past). Those (hip-check) plays have injuries. … I got 17 minutes out of it, so I think I paid the price for it.”