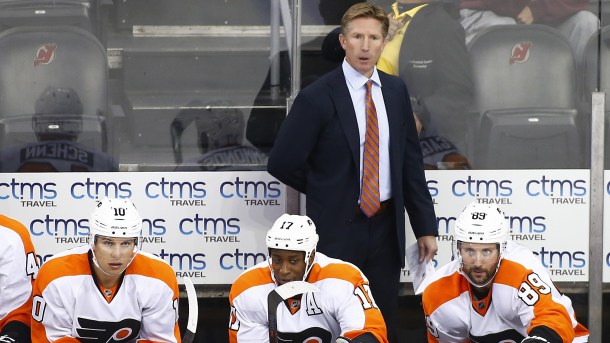 If they they make the playoffs, it’ll accelerate the organization’s youth movement and keep Dave Hakstol off the hot seat. If they don’t, Flyers fans will at least be able to take solace in the fact that the infusion of youth means brighter days are ahead.

Flyers camp is right around the corner, so let’s review where the Orange and Black stand:

2017-18 Flyers Analysis: The Flyers will sport a different, younger look this fall, with a new goaltender, a new second line center and a handful of prospects vying for significant roles.

What’s less clear is whether they’re any better than the 2016-17 edition, which enjoyed a 10-game winning streak but still finished seven points out of the playoffs.

The answer to that question likely will be determined by their ability (or inability) to improve in two critical areas: stopping pucks and 5-on-5 scoring.

In an effort to improve the former, GM Ron Hextall signed goalie Brian Elliott to a two-year, $5.5 million contract on July 1. Although Elliott figures to split time with Michal Neuvirth, the hope is that the well-traveled 32-year-old will be better than Steve Mason and can help Philadelphia improve upon its 26th ranked team save percentage from a year ago (.901).

The Flyers are in need of a big boost at the other end of the ice, as well.

Although there were many culprits for Philly’s offensive woes, Claude Giroux’s subpar season underscored the problem. The 29-year-old captain, who is also the team’s highest paid player with a cap hit of $8.275 million per, finished with 14 goals and 58 points in 82 games, marking a third straight year of declines for the first line center. In 2013-14, Giroux was the NHL’s third leading scorer with 86 points.

If Giroux rebounds, second overall pick Nolan Patrick produces as a rookie, wingers Jakub Voracek and Wayne Simmonds do their thing and Shayne Gostisbehere also bounces back, it’s not unreasonable to expect the Flyers to pack a more formidable offensive punch.

2017-18 Flyers Season prediction: You’ve got imagine the goaltending will be better than it was last year, particularly if they get the Brian Elliott who posted a .936 save percentage in March for the Flames, not the one who scuffled so mightily early in the year. And there’s no way Neuvirth is that bad again, right?

Assuming they get what they need in net, and a few of the youngsters manage to outperform expectations the way Ivan Provorov did as a rookie last year, it wouldn’t surprise me to see Dave Hakstol and a youthful Flyers’ lineup loitering on the edge of the playoff race late in the season.