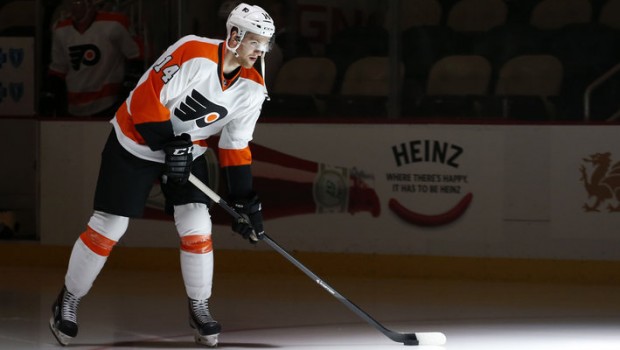 FLYERS' COUTURIER BEAT PENS ON THE ICE AND IS NOW IN THEIR HEADS!

In case you need more evidence that the Flyers have psychologically beaten the Pittsburgh Penguins, check out this column by award-winning Dejan Kovacevic from DK on Pittsburgh Sports:

The Flyers are in the Penguins’ heads.

Or, as one team official fumed afterward, “They’re in our [expletive] heads.”

[Expletive] right they are. And exorcising them isn’t exactly optional, no matter how hard the Penguins tried to make it look with this sweat-free affair.

Call it intangible, call it mumbo-jumbo, but sometimes it really is that simple.

Take Sean Couturier, for example. He’s the Flyers’ 21-year-old semi-checking center who has largely underachieved since being the eighth overall pick in the 2011 NHL Draft. But line him against Evgeni Malkin, and he’s a modern-day Guy Carbonneau, no doubt recalling that he once checked Malkin into submission in the playoffs. Seriously, the kid finished this one with a goal, two assists, a plus-2 rating, and a 10-8 night on draws. And mark it down in bright orange: He won’t be seen or heard again for weeks.

Something just triggers. And it’s almost always negatively for the Penguins.

“I don’t know, maybe it’s mindset,” Johnston replied when asked for his fresh perspective on this. “I’m sure it was, because at times tonight it looked like a mindset. Other times, it looked like we were in control of the game. When a team does that to you in your own building, you’ve got to take a look at maybe you’re trying to force things too much, maybe you’re on edge too much. And you really can’t get that way. You’ve got to stay with the focus of the next shift.”

Marc-Andre Fleury might not have lost this game, but he sure didn’t win it. R.J. Umberger’s tiebreaker and eventual winner at 6:50 of the third was eminently stoppable, a bouncer that the pride of Plum smacked into the short side.

Crosby had no points, was a minus-2 and turned the puck over left and right.

Malkin had a second assist, was a minus-3 and … wow, you saw.

Kris Letang might as well have been credited with assists on the Umberger goal.

That quartet, if anyone requires a reminder, is the core of the franchise. And that should tell you how deeply it’s rattled when the Flyers come to town.

0 thoughts on “FLYERS' COUTURIER BEAT PENS ON THE ICE AND IS NOW IN THEIR HEADS!”