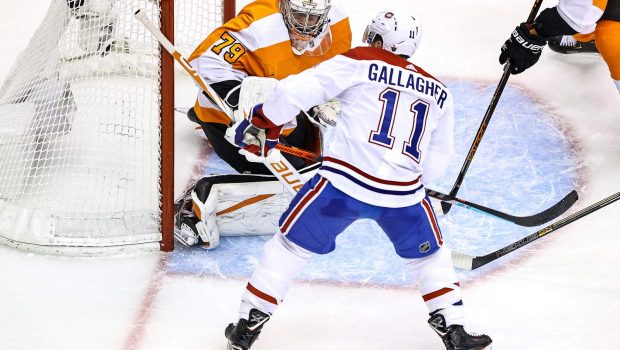 FLYERS COME BACK TO EARTH AS HABS STAY ALIVE!

The Canadiens put a pin prick in the Flyers bubble last night, and they stayed alive — at least for now.

Nick Suzuki scored the tie-breaking goal in the third period for the Canadiens in a 5-3 win against the Flyers in Game 5 of the Eastern Conference first round.

Montreal will try to extend the series again in Game 6 Friday night.

Jakub Voracek scored two power-play goals and had an assist for Philly, the No. 1 seed. Carter Hart made 28 saves.

“Their season’s on the line, so you know that they’re going to bring their best,” Flyers defenseman Matt Niskanen said. “I think we were half a step slow killing plays, so they were able to connect on a few passes and get some looks in the slot and convert on a couple.”

Hart had his shutout streak ended at 122:53; he had shut out the Canadiens in Games 3 and 4. It was the second time in his two NHL seasons Hart started games on back-to-back days; he made 29 saves Tuesday.

“He was playing extremely well,” Flyers coach Alain Vigneault said. “Tonight there might be one or two he might want to have back. At the end of the day, we have a lot of faith in him. He’s played extremely well for us. He’ll be fine next game.”

Suzuki gave the Canadiens a 4-3 lead at 10:59 of the third period. Jonathan Drouin got to a Flyers turnover behind their net and made a behind-the-back pass in front to Suzuki, who deked around a lunging Hart and scored.

The goal came 22 seconds after Joel Farabee tied the game for the Flyers at 3-3 with a power-play goal at 10:37.

“The thing I really liked was our response,” Muller said. “Philly scored a couple goals and we came back, they score late in the game and [Suzuki] scores the very next shift. I don’t think we allowed them to get some momentum because of the goals we were able to score.”

Armia gave the Canadiens a 1-0 lead with a shorthanded goal at 2:53 of the first period. The Canadiens are 5-0-0 when scoring first in the postseason, including 2-0 against the Flyers.

“I think the whole team played great,” Armia said. “We gave everything we’ve got every shift and just kind of focused on playing simple and shooting the puck. I don’t think there’s any magic tricks, just keeping it simple.”

The Flyers took a 2-1 lead in the second period on two power-play goals by Voracek after Montreal forward Jesperi Kotkaniemi was assessed a major penalty for boarding and a game misconduct.

A one-timer from the right circle went off the stick of Canadiens defenseman Ben Chiarot past Price to make it 1-1 at 2:35, and then a centering pass went off Chiarot’s skate at 6:37 to make it 2-1.

They were the Flyers’ first power-play goals of the series after going 0-for-16.

“We were just connecting on those plays,” Voracek said. “Those goals, those passes … in the past games I don’t think we were patient enough and always out of position for the pass. Today we were clicking well, the communication was good. That was the reason we scored those goals.”

Gallagher gave the Canadiens a 3-2 lead with a power-play goal at 11:30. He entered with an NHL-best 34 shots on goal during the postseason but zero goals. He had tied Tomas Tatar for the Canadiens lead with 22 goals this season.

“Brendan did it again,” Price said. “He’s got one of the biggest hearts of any guy I’ve ever played with. We know what we get from him, we get 100 percent compete. He came up with a big one for us tonight.”

Suzuki had a goal disallowed for offside with 5:29 remaining in the second after the Flyers challenged the play.

Danault scored an empty-net goal with 18 seconds remaining in the third for the 5-3 final.