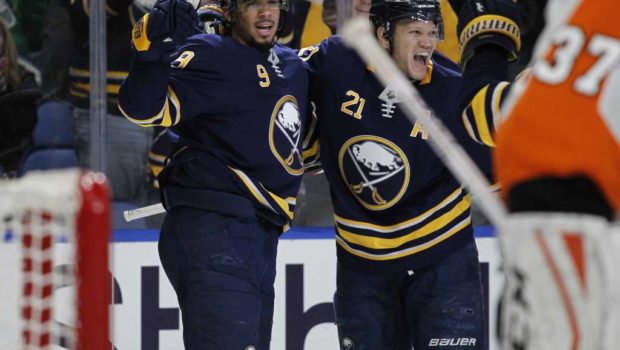 Ryan O’Reilly scored on a bad-angle shot, sparking a four-goal third period for Buffalo in a 4-2 win over the Flyers.

The Sabres celebrated winning for just the fourth time in 20 games.

Buffalo bounced back from a 3-0 loss to Boston on Tuesday. The Sabres also overcame their own slow-starting offense that has scored an NHL-worst 15 first-period goals.

The Flyers’ Brian Elliott finished with 33 saves in his 400th career game. Though Michael Raffl scored on the power play, the Flyers came up empty on their first four opportunities with the man advantage, including 40 seconds of 5-on-3 play early in the third period.

”Brian Elliott gave us a chance after two periods to go out and salvage the game in the third period, but we didn’t do it,” Philly coach Dave Hakstol said. ”We didn’t make enough plays under pressure tonight whether that was 5 on 5 or on the power play.”

The Flyers lost for just the second time in nine games, and had a three-game road winning streak snapped.

Elliott stopped 28 shots through 40 minutes, including a glove save on Kane’s penalty shot. He also stopped Kane twice and Kyle Okposo from the slot during a Sabres flurry in front 7 1/2 minutes into the second period.

”We can’t expect to win games when we’re playing like that,” Gostisbehere said. ”(Elliott) gave us every chance possible to win that game.”