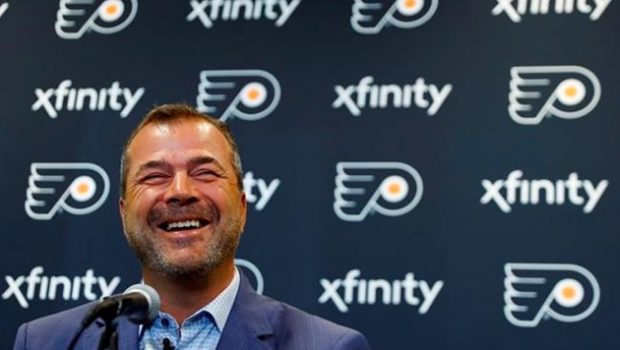 FLYERS COACH HAS NO ANSWERS FOR MELTDOWN: TIME FOR HIM TO GO?

Joel Farabee scored for the Flyers (15-11-3), who played without center Sean Couturier because of a lower-body injury and finished 2-2-0 on a four-game road trip. Carter Hart made 22 saves.

Philadelphia allowed 15 goals in the two losses (9-0 at New York Rangers on Wednesday).

“That’s definitely not the way we want to play, and it has to stop,” Flyers forward Travis Konecny said. “It has to be fixed now because it just can’t continue. It’s hard to play that way. I think everyone knows that they have to do better, and we just need to keep working at it.”

Casey Cizikas made it 3-0 when he stripped defenseman Nate Prosser at the Flyers blue line and scored on a wrist shot from the left circle at 10:03.

Flyers coach Alain Vigneault called a timeout after the goal.

The Flyers had 20 giveaways in the game.

“I really thought prior to the game that we were focused. We talked about making sure that we follow up that performance that we had [Thursday] with another solid one, making the right plays. But right off the bat, initially we were turning pucks over in the neutral zone. You give opportunities like we did to any team, they’ll find a way to put them in the net, and that’s what they did.”

Cizikas scored again on a one-timer off a pass from Thomas Hickey to give the Islanders a 4-0 lead at 15:25.

Farabee made it 4-1 on an odd-man rush at 17:52 of the first with a wrist shot from the right circle.

Vigneault said he is unsure if Couturier will be able to play Monday. Couturier participated in warmups, but he and the training staff determined he should not play