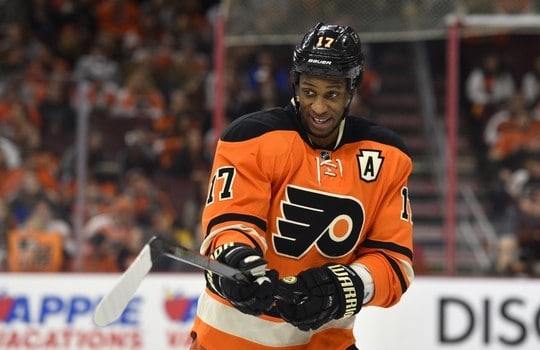 Wayne Simmonds (above) scored two goals, Steve Mason stopped 18 shots and the Flyers clinched a playoff berth with a 3-1 win over the playoff-bound Pittsburgh Penguins Saturday at the Wells.

The Flyers’ win eliminated Boston, which lost to Ottawa 6-1 earlier in the day. The Bruins lost a tiebreaker to Detroit. The Flyers will meet top-seeded Washington in the first round. The Penguins, who are the No. 3 seed in the Eastern Conference, will play the Rangers or Islanders.

Pittsburgh rested Sidney Crosby and Kris Letang and played without Evgeni Malkin for the 15th consecutive game because of an upper-body injury.

Penguins goaltender Matt Murray was injured in a collision with Brayden Schenn and left the game in the first period. Murray has started five straight games because Marc-Andre Fleury is out with a concussion.