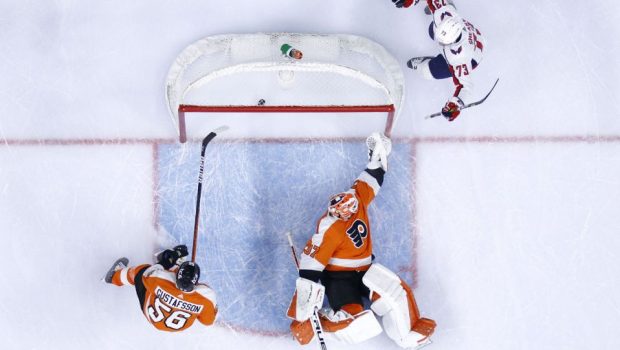 It’s the day after the trade deadline, when the Flyers got rid of dead wood Mike Raffl and Erik Gustafsson for draft picks.

And it would be hard to not conclude not general manager Chuck Fletcher has given up on this season.

However, they have a game tonight in DC against the Caps.

Philly has lost three of its last four, including a 5-3 decision to Buffalo on Sunday. They held a 3-2 lead late, but the Sabres scored three times in the final 3:03 to shock the Flyers.

Oskar Lindblom and Joel Farabee scored for Philly in the first period for a 2-0 lead. After Buffalo tied it with two goals in the second period, Shayne Gostisbehere put the Flyers up again in the third before the Sabres’ late rally.

Flyers forward Scott Laughton, whose contract was set to expire at the end of the season, agreed to a new five-year, $15 million deal with the team Monday. He has seven goals and 10 assists this season.

The Capitals played one of their most complete games of the season Sunday in an 8-1 rout of the Bruins in Boston. They hope to continue that level of play when hosting the Philadelphia Flyers on Tuesday.

Coach Peter Laviolette and his team have fretted all season about Washington’s struggles to play a solid 60-minute game — and be effective at both ends of the ice. But everything worked against Boston as T.J. Oshie, Lars Eller and Conor Sheary each scored two goals.

Oshie added an assist to lead the team with three points, giving him 600 for his NHL career.

And the prospects for the offense keep getting better. On Monday, the Capitals added forward Anthony Mantha from the Detroit Red Wings in exchange for forwards Richard Panik and Jakub Vrana plus a 2021 first-round pick and a second-round pick next year. Mantha is signed through 2023-24 and led the Red Wings with 11 goals, while ranking second with 21 points.

Washington also acquired forward Michael Raffl from the Flyers in exchange for a fifth-round pick.

The Capitals’ power play connected of three of their six chances, and tying a season high. All 12 forwards and 15 of the 18 players who dressed posted at least one point.

Plus, rookie goalie Vitek Vanecek was solid once more. He finished with 34 saves and keeps improving and helping Washington remain in the game even if it starts slowly, which has been a problem at times recently.

“It was good to get contributions throughout the lineup,” Laviolette said. “I said before, at times when the schedule, when we’re up against it, we’re just trying to spread the lines out so we can roll them, try to maximize the energy in the players and on the bench and throw what we have inside of the scheduling. This has been one of those examples where there’s potential for each line to do something, and tonight it all kind of just worked.”

Boston had beaten the Caps 4-2 in Washington just a few days before, taking a 3-0 lead in that contest, before things changed in this game.

After Sunday’s win, the Caps remained tied with the New York Islanders for first place in the East Division in a race which seems likely to go right down to the finish line.

Meanwhile, Washington will be able to play in front of a limited number of fans at home starting on April 27 versus the Islanders — 10 percent capacity, according to a team statement on Monday.