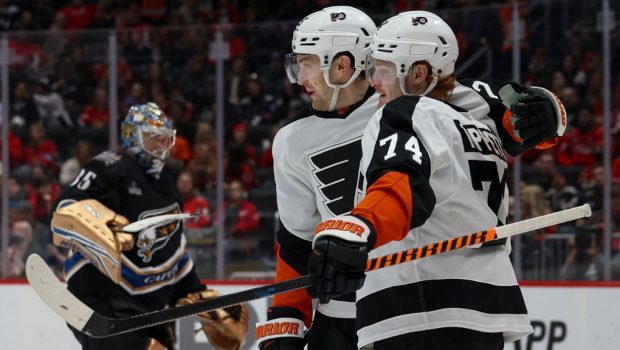 Scott Laughton had a goal and an assist and the visiting Flyers beat the Washington Capitals 3-1 as Capitals star Alex Ovechkin tied the NHL record for 30-goal seasons.

Ovechkin has scored at least 30 goals for 17 seasons, tying him with Mike Gartner for the most 30-goal seasons in NHL history. He tied the game at 1 with 2:04 left in the first period. Philadelphia titled the ice back in its favor with two goals in 49 seconds in the second period. James van Riemsdyk and Wade Allison both capitalized on miscues from Darcy Kuemper and poor coverage by Washington, who has been outscored 11-7 over the last four games.

The Flyers have won three straight games, including both games of their home-and-home series with the Capitals, and eight of their last 11 overall.

“I think we feel good about ourselves. I think guys have loosened up offensively, it certainly has helped that we’re scoring some goals during this period, not every mistake is a fatal one,” Flyers coach John Tortorella said. “We’re just cohesive right now. … We’re gonna have some bumps here, and it’s remembering how we’re playing now when we’re in those situations.”

Carter Hart finished with 39 saves for his third win in four starts and made a couple of ten-bell saves to shut down Washington’s three power play opportunities. The Capitals have gone four straight games without a power-play goal and are 0-for-9 over that span.

“Hartsy played a hell of a game for us,” Laughton said. “He found pucks through traffic, swallowed them up when we needed him to, when we were stuck out in the zone for long periods of time. And I thought he was the biggest part of why we were successful tonight.”

Kuemper stopped 22 for the Capitals, who continued to experiment with different line combinations as Nicklas Backstrom and Tom Wilson continue to get comfortable.

“The last two games, we haven’t been ourselves,” Backstrom said. “So I mean, that’s something we have to change. You talk about today, we had the puck a lot, we had good possession, but it’s about scoring goals. We got to create more, we got to score more goals. But at the same time, you got to give them credit … at the same time, if we want to win hockey games, we have to be better.”