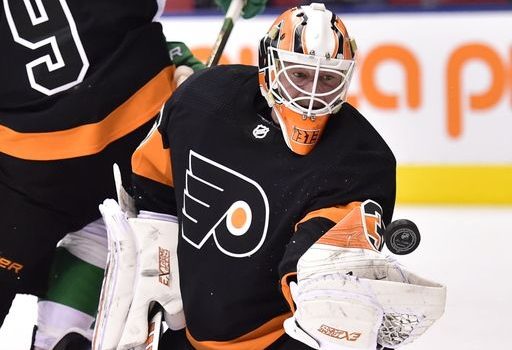 You wouldn’t expect a desperate NHL team, fighting to get into the playoffs, to blow a three-goal lead.

But then, these are the Flyers and they’ve been blowing games all year.

And as a result they are stuck at 76 points, seven behind Columbus for the second wild card, with just 11 games to play.

Auston Matthews scored twice late in the third period as the Maple Leafs rallied from a three-goal deficit and held on to beat the Flyers 7-6.

Jake Muzzin had two goals and an assist, and Patrick Marleau, Zach Hyman and Martin Marincin also scored to for the Maple Leafs, who had five consecutive goals to take the lead after trailing 5-2. Toronto snapped a two-game skid and pulled two points behind Boston for second place in the Atlantic Division.

William Nylander, Nazem Kadri, Nikita Zaitsev and Ron Hainsey each had two assists for the Maple Leafs, and Frederik Anderson finished with 23 saves.

Matthews got the tiebreaking goal with 5 minutes left, taking a one-handed pass from Nylander in front and burying it past Brian Elliott. He then added his 34th of the season with 2:39 remaining off a rebound on a rush to put the Maple Leafs up 7-5.

James van Riemsdyk got his third of the night for his fourth career hat trick on a tip with 1:14 left for his 24th to pull the Flyers within one. However, Toronto held on as Andersen recovered from some questionable moments to rob Shayne Gostisbehere in the closing seconds.

Gostisbehere and Radko Gudas each had a goal and an assist, and Jakub Voracek also scored for the Flyers. Claude Giroux had three assists, Nolan Patrick and Sean Couturier each had two and Brian Elliott had 44 saves. Philly has lost two straight after a 6-1-1 stretch.

”We know what kind of team they are,” van Riemsdyk said. ”They can score at will. They’re never out of a game.”

Tied 1-1 after the first, the Flyers went ahead at 1:15 of the second when van Riemsdyk tipped his 22nd past Andersen. The forward, who spent six seasons in Toronto before returning to the team that drafted him as a free agent last summer, made it 3-1 when Giroux threw a puck in front that van Riemsdyk got a stick to before it dribbled through Andersen at 8:26.

Hyman, who returned to the lineup after a one-game absence because of the flu, scored his 17th on a slick setup by Mitch Marner just 61 seconds later to get Toronto back within one, but Gudas restored the Flyers’ two-goal lead with his third of the campaign and first in 37 games.

Gostisbehere then made it 5-2 less than a minute later when he swept home his seventh after a scramble in front.

The Flyers got on the board first as Voracek, back after missing two games due to a suspension for a hit on Islanders defenseman Johnny Boychuk last Saturday, scored on a one-timer off Patrick’s faceoff for his 19th with 7:38 left in the first.

Toronto tied it at with 2:15 left in the period on the power play when Nylander’s shot went off Marleau for his 15th, and first in eight games.