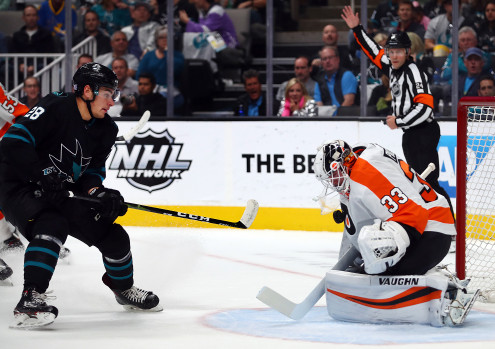 FLYERS CHOKE IT AWAY IN OVERTIME IN SAN JOSE 4-3!

Timo Meier got his second goal of the game 13 seconds into overtime and the Sharks rallied to beat the visiting Flyers 4-3.

Nolan Patrick, Jordan Weal and Jakub Voracek scored for the Flyers, who were looking to sweep the California portion of its trip after beating Anaheim and Los Angeles earlier in the week. Oskar Lindblom had two assists and Cal Pickard stopped 29 shots in his third start.

Meier’s winning goal was his 11th on the season, and eighth in his last seven games.

“He’s been great,” Sharks coach Pete DeBoer said. “Thankfully he’s off to the start he’s off to. We need him. We needed somebody to step up.”

Thornton’s first goal of the season with just under 5 minutes left in the third tied the score 3-3.

Thornton, 39, missed nearly half of last season after undergoing knee surgery on his right MCL, and just came off injured reserve with swelling in the same knee.

Voracek had given the Flyers the lead with 30 seconds remaining in the second.

Patrick opened the scoring just 37 seconds into the game, and Meier tied it at 3:15.

Weal put the Flyers back ahead with 3:20 left in the opening period, but Pavelski evened the score again just past the midpoint of the second.

“I’m (upset) about losing tonight, so that’s all I evaluated,” Flyers coach Dave Hakstol said. “Not worried about the last two games and I’m not worried about the next game. I don’t like the way we lost the game tonight and that’s that. But we had a lot of guys that battled hard tonight and that park I like. We came into a tough building, we fought for a point, we wanted the next point.”